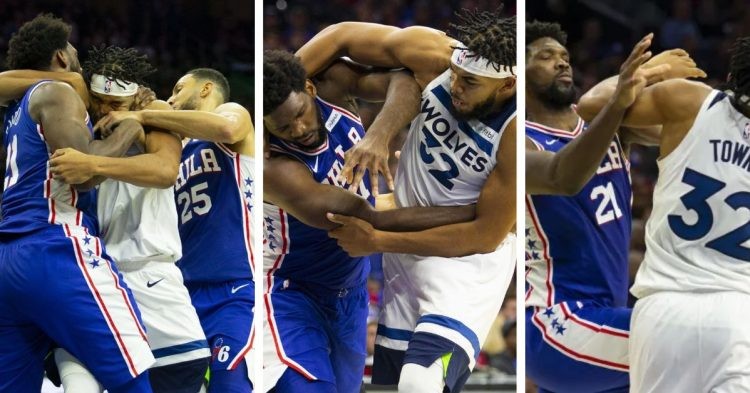 Fights in the NBA have not happened that much in recent years. One fight that stays on our minds would be Joel Embiid vs Karl-Anthony Towns when the Philadelphia 76ers played against the Minnesota Timberwolves.

The two players were the best centers in the NBA at the time. We can argue they still are, considering the consistently dominant performances they have been putting up. During the game, the pair started pushing each out of nowhere. The live streaming cameras didn’t catch them in the act as the game continued to go on.

However, when Towns tried to go for a punch on Embiid, he missed. That’s when things got real serious. Both of them started wrestling each other and grabbing each other’s necks. It seemed like neither of them had control of what they were doing. Moreover, Joel’s teammate Ben Simmons came to his defense and grabbed Towns.

You would’ve thought Simmons was trying to stop the pair from fighting. However, he was also trying to give it to KAT from what we can see. Wolves’ Jeff Teague managed to drag Embiid out of the tussle. Many, including Sixers players on the bench, seemed to be impressed and hyped up about what Embiid did that they did not notice what Simmons was doing to Karl-Anthony Towns.

Despite Teague dragging Embiid away, Simmons didn’t hold himself back. As he wrestled Towns to the ground, he got him in a rear naked choke. None of us knew Ben had that in his locker. His choke was so firm that Towns had no other choice but to tap out. The move looked like it was straight out of a UFC fight night.

The fight caused both Towns and Embiid to receive a suspension for two games. The surprising decision was that the NBA decided that Simmons was the “peacemaker” and he did not receive any punishment.

If you thought they both walked home and forgot about the fight, you were wrong. It seems like they both were serious about trying to blow wrestle each other. Joel Embiid posted on his Instagram shortly after the game.

Great team win!!! I was raised around lions and a cat pulled on me tonight lmao.. Got his mama giving middle fingers left and right. That’s some SERIOUS REAL ESTATE #FightNight #IAintNoBitch pic.twitter.com/MWc9p0jy7u

He said, “I was raised around lions and a cat pulled on me tonight lmao…. I got his mom giving middle fingers”. He also gave an interview where he said, “I ain’t no bi*ch*”.

Joel Embiid says he did what he had to do. pic.twitter.com/U1EBLi38n5

Embiid’s words got KAT to respond and he didn’t hold back either. He tweeted, “I aIN’t nO BiTcH”. He also mocked Embiid for his comments on being raised around lions with cap and clown emojis.

I aIN’t nO BiTcH

Although both of the players have seemed to calm down and put the incident behind them, the fight was still one of the worst in the history of the league. The worst fights in the NBA have seen people bleed and players receiving medical attention.