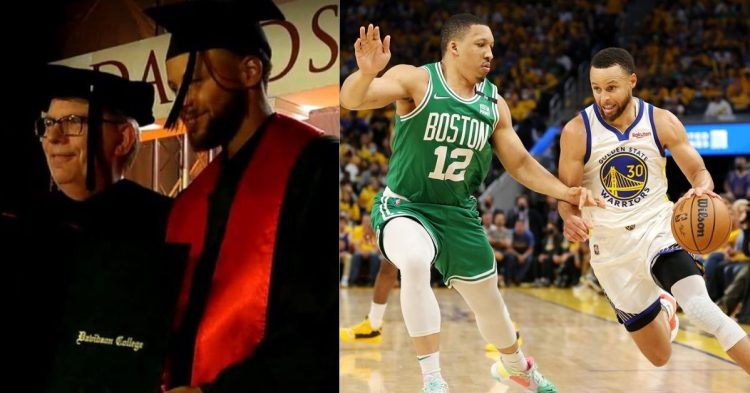 The 2022 year just got better for Stephen Curry. He won the NBA Championship with the Golden State Warriors, together with his first-ever Finals MVP trophy. Now, he has graduated from his college, Davidson 13 years after leaving to join the NBA.

Apart from giving The Chef his diploma, Davidson also inducted him into their Hall of Fame. In addition to that, they also retired his jersey number, 30. He becomes the first-ever player in the college’s history to have that honor.

There will never be another.

Many have come out and shown their support for the 33-year-old. His parents, Dell and Sonya, and his son Canon to name a few. However, one person that caught the attention of many with his comments is Grant Williams.

The Boston Celtics youngster recorded a video of him congratulating Curry on his recent accomplishments. In the video which Davidson posted on Twitter, he said, “First off, I just wanted to say congratulations. It’s a huge accomplishment, it’s a blessing. I wore 30 in high school because of you. I’m not wearing a ring because of you, so I’m a little partial. But congratulations on your success. I wish you luck, and I’ll see you again next year.”

Steph and Grant faced each other in the 2022 NBA Finals, when the Warriors came out on top. Williams did not play much, the longest being just 21 minutes. In six games, he averaged 4.2 points, 2.3 rebounds, and 1.0 assist against GSW. Despite not featuring much, the wound must still hit. It’s not every day you reach the NBA finals at an early stage of your career.

On the other hand, the Baby-Faced Assassin did his thing. He was on fire during the finals as he averaged 31.2 points, 6.0 rebounds, and 5.0 assists. His performances included a Game 4 masterclass as he made 43 points to take the win to The Bay.

Williams also mentioned that he wore the number 30 in high school because of Steph. When you think of the greatest players, there is a high chance that Michael Jordan or LeBron James comes to your mind before Curry does. However, it seems like he is making his way there as time goes on. Steph’s influence in the game has surely increased in recent years as he is becoming one of the best players in NBA history.