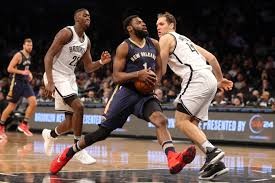 Brooklyn Nets will take on New Orleans Pelicans as the first of their 2 game season series in 2021. They have won 20 matches each in the last 20 seasons. But lately, Brooklyn has dominated the last 5 matchups.

Brooklyn Nets had their 5 game winning streak snapped by Chicago Bulls. But Nets then bullied Orlando Magic and won by 33 points. No Orlando player could cross 20 point mark. Kevin Durant though, became 1st Nets player to score 30 points with 90% shooting in their last 40 seasons.

Nets will also be excited for a triple-double by James Harden and a 20+ point game for Aldridge against Orlando. Durant had been carrying the team from the start, putting big numbers. But as an early part of the season is almost over, Nets players are getting into their stride and making a push for the top seed.

📼 | Another night, another @JHarden13 triple-double pic.twitter.com/Siocvzs6Xf

Pelicans tried building the team around their sensational Rookie – Zion Williamson. But he has not played a single match this season yet. Brandon Ingram, Pelicans star forward also has been away for 6 matches out of 12.

Jonas Valanciuanas has impressed in his 1st year as a Pelican player. He leads them in Scoring (20 ppg), Rebounds (14) while playing 12 games. His last 3 games were even more productive than his season average.

Brooklyn has nearly adjusted the life without Kyrie Irving, as other players are now contributing heavily for them. Irving, of course, is still a very important player for them in big matches. With some low-scoring games, the Nets have an average of 106.6 points per game, allowing 103.4 points per game.

New Orleans has injuries to worry about. Offensively they averaged 100.6 points per game and defensively allowed 111.9 points per game. Pelicans secured their sole victory against Minnesota Timberwolves – ridding onto double-double performance by Valanciuanas.

Brooklyn Nets will be pleased with the timing of this fixture. They can rest some of the star players by reducing their floor-time, keeping them fresh for the upcoming Warriors game. Even with fewer minutes on the floor by main players, the Nets should be able to wrap this matchup convincingly.

How to watch Brooklyn Nets vs New Orleans Pelicans?

Brooklyn Nets vs New Orleans Pelicans will take place in Smoothie King Center. The stadium is prepared to accept fans in full capacity. Locally Bally Sports will broadcast the match for New Orleans. International viewers can access the game on NBA League Pass.