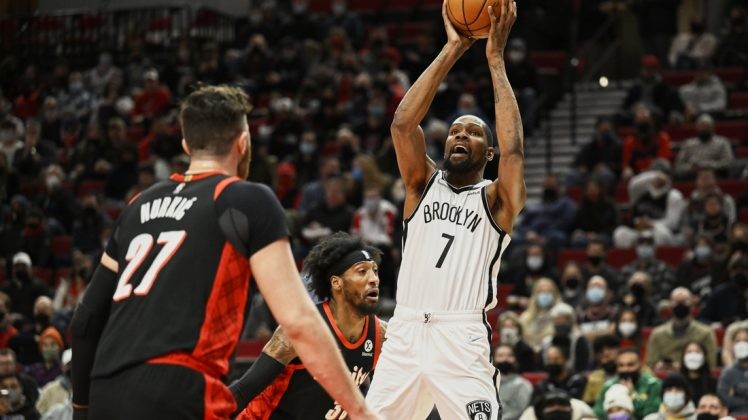 The Brooklyn Nets host the Portland Trail Blazers at the Barclays Center in a bid to return to winning ways. The East’s 8th-ranked Nets’ 4-game winning streak was interrupted by Luka Doncic and the Mavericks as they downed them with a buzzer-beater from former Net, Spencer Dinwiddie.

But if anything, the Trail Blazers should be easy pickings for Kevin Durant and co. as they have lost 8 times in their last 10 outings. But Portland is not out of the season yet, as they are within touching distance of the Play-In positions in the Western Conference.

The Trail Blazers recorded a surprise victory against the Nets and that too without their superstar guard, Damian Lillard. Anfernee Simons put in a great shift at the guard position as he scored 23 points, 6 rebounds, and had 11 assists. He was helped by Robert Covington and Ben McLemore scoring 21 and 20 points, respectively.

The Nets on the other hand could not avoid the upset despite both Kevin Durant and Kyrie Irving scoring 20+ points. Durant had 28 points and 10 rebounds, while Irving scored 22 and had 8 rebounds to go with 4 assists.

The Nets will get back to winning ways after their blip against the Mavericks and build on their momentum to get out of the Play-In positions. Despite the Trail Blazers being a stubborn opponent, there is not much they can do to contain a vengeful Kevin Durant.

The Brooklyn Nets will defeat the Portland Trail Blazers.

How to watch the Brooklyn Nets vs Portland Trail Blazers?

You can watch the Brooklyn Nets vs Portland Trail Blazers on Root Sports’ coverage. Likewise, the game can also be streamed through NBA League Pass for fans across the world. And for play-by-play commentary, you can tune into Rip City Radio 620 on the radio.