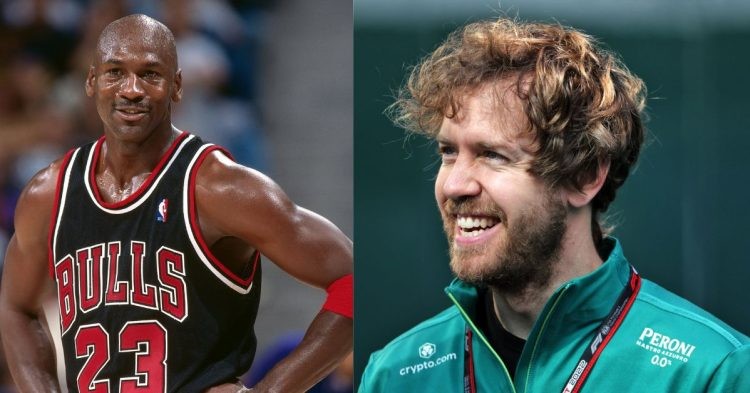 There aren’t many that we can call “NBA Royalty”. But Michael Jordan is surely at the top of that. No one can come close to the things he has achieved in the league. He has won 6 NBA Championships. He won three rings in a row twice in his career. The only player that can be mentioned in the same sentence as Jordan would be the Lakers star, LeBron James.

Apart from his accomplishments on the court, Jordan was also famous for his impact off it. The former Chicago Bulls star managed to expand his horizon over the seas to other countries. Even athletes from other sports have looked up to Jordan for his character. One of such athletes would be F1 star Sebastian Vettel.

In 2021, Sebastian Vettel did a pre-race interview before the Abu Dhabi Grand Prix in December. The question for him was if he became who he dreamed to be when he was younger.

“did you become who you dreamed to be when you were younger?” 💭 pic.twitter.com/voytYB7xfK

There’s a pattern to the German’s idols if you notice it. All his role models were people who dominated their respective fields. However, although he could not surpass Schumacher’s achievements, we can say that he was definitely close to it.

Moreover, Vettel won 4 F1 Driver Championships in a row. That was the period when the former Red Bull driver was in his prime. His absolute domination reminds us of Jordan’s three-peat with the Bulls in the 90s. When the times got hard with his team, Jordan didn’t bail on them and decided to stay with them to help bring home the title.

Similarly, Vettel stuck with Ferrari during his prime despite knowing that the situation wasn’t easy. Earlier today, the Aston Martin driver announced that he will be retiring at the end of the season. He has raced for Red Bull, Ferrari, Aston Martin, and Toro Rosso throughout his time as an F1 driver.

BREAKING: Sebastian Vettel has announced he will retire from F1 at the end of the 2022 season

During his time, Seb won 53 times and stood on the podium 122 times. He closes an illustrious career where has enjoyed a wonderful time filled with trophies and wins. Although Vettel claims he has not come close to being like Jordan, it should be mentioned that he is a legend in his own regard.