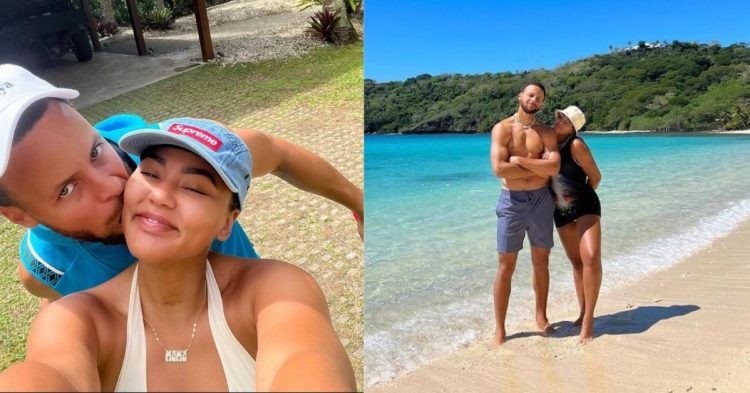 Stephen Curry just had an eventful year in the NBA. He won his fourth title with the Golden State Warriors and the franchise’s seventh. We all know how he played throughout the season. Steph did his thing often and helped his team when they needed it the most.

After putting in a shift almost every game this year, Steph deserves a long break. He needs to relax his body and mind to prepare for the upcoming 2022-23 NBA season. The competition in the league just got higher and he needs to be at the top of his game like the last season as well.

Recently, pictures of Steph and his wife Ayesha Curry emerged. The married couple was on vacation in an unknown place.

An author known for cookbooks, Ayesha shared the pictures on her Instagram page. In one of her posts, Mrs. Curry is bossing an orange swimsuit on the beach. In the next picture on the same post, Steph poses with her with a smile on his face.

Ayesha started posting images of their couple’s vacation four days ago. After several posts, she finally revealed the beautiful location in her most recent Instagram reel where the pair spent their time at.

“Perfect ending to our #sibsandsigs 2022 trip! We experienced the beauty and culture of Wakaya Island. Bonded, created memories and finished off our adventure by saying prayers and wishes and floating them away beautifully to manifest,” the 33-year-old mentioned in the caption.

It seems like the Currys spent their offseason at Wakaya Island. It is a privately owned island that is located in Fiji. The place is known for its cultural significance in terms of cuisine and the unique food. It makes sense why they chose that place since Ayesha is a culinary expert.

This wasn’t the pair’s only holiday this year. Earlier this year, Steph and Ayesha went for a holiday to an unknown location for their 11th marriage anniversary. Just like now, the pair took to social media to share their feelings for each other.