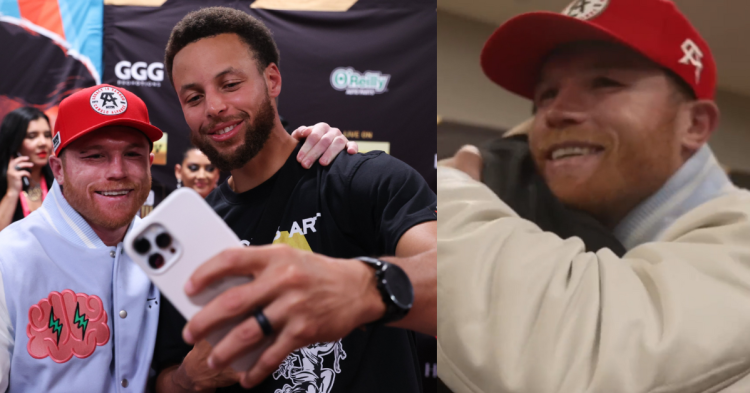 The Golden State Warriors star Stephen Curry was spotted in the famous T-Mobile Arena in Las Vegas, Nevada to witness the great bout between Canelo Alvarez and Gennadiy Golovkin.

Steph Curry at the Canelo vs GGG fight pic.twitter.com/rY3HeBzKiw

Canelo won the trilogy fight against Golovkin as a result of an unanimous decision by the judges. He retained his title of undisputed super middleweight champion of the world.

.@StephenCurry30 linked up with @Canelo after the W 🐐🐐 pic.twitter.com/pGSTM48q3L

Steph wasted little to no time in congratulating the winner backstage after his victory. They even made several clips to commemorate his special moment.

Apart from embracing each other, the two athletes also did something else that caught the attention of many. In a video, Steph said, “I’m here with the champ baby.” Canelo responded, “Both win this year, he’s the best”. Steph admitted in style, saying, ” That’s all we do is win”.

The Golden State Warriors have dominated the past decade, winning 4 Championships in the past 8 years. Stephen Curry was instrumental for their recent Championship. He averaged an unbelievable 27.4 points, 6 assists, 5 rebounds and 1 steal to lead his team to victory.

Steph also created history by becoming the first Western Conference MVP and Finals MVP in the same season. This season also marked his first Finals MVP, debunking the narrative that Steph is not the star player of the team.

The Golden State Warriors star won his 4th title at The Bay this year, increasing the franchise’s total to 7. In addition to that, Curry also brought home the Finals MVP trophy, his first-ever. In the past, there have been instances where he has performed well and not been able to win it. However, it is safe to say that he was the only outright winner this year.

With Kevin Looney and Quinndary Weatherspoon joining the Dub Nation in the off-season, The Warriors seem to be in full momentum to create history this season. If the Warriors manage to win the Championship again next year, they will become the second team in NBA history, alongside Jordan’s Bulls, to win back-to-back titles twice.

If the Dub Nation wins it again, this will mark Steph’s 5 ring and it would bring him one step closer to become the greatest point-guard of all time.