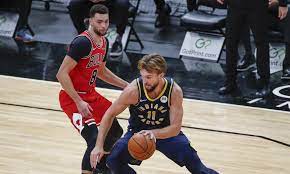 Eastern Conference top seed Chicago Bulls will take on 13th seed Indiana Pacers at United Center this Sunday. The Bulls have retained the top spot after 2 consecutive wins, while the Pacers are confident after a recent 17 point victory over the Pelicans.

Nikola Vucevic missed 6 straight games after entering the NBA’s health and safety protocol for COVID-19. Vuscevic will not be available for this match either, but the Bulls have won 4 out of 6 matches without their star center.

Zach LaVine will be happier with the roster, as he is able to perform better with the current team composition and the presence of other attacking options in the squad. DeRozan, Lanzo Ball, and Alex Caruso are performing well at both ends of the floor for the team.

Malcolm Brogdon has been consistently scoring 20 around points for the Pacers. Other starters also have a 10+ point average for the season but are lacking consistency. Domantas Sabonis and Myles Turner – the only two regulars on the team, have done well around the rim area.

Coach Rick Carlise will be pleased with the fact that the team is performing well, even in defeats. Indiana has lost 6 matches with a margin of fewer than 5 points. Indiana is the only team with a +0.4 margin despite losing 11 matches in 18 games.

With all the starters in their hot form, the Bulls are expected to defeat the Pacers on the road.

How to watch Chicago Bulls vs Indiana Pacers?

The Chicago Bulls vs Indiana Pacers match will take place at the United Center. The stadium is prepared to accept fans at full capacity. International viewers can access the game on NBA League Pass. NBC Sports Chicago will be the local broadcaster for the Bulls, while Bally Sports Indiana will telecast the fixture in Indiana.