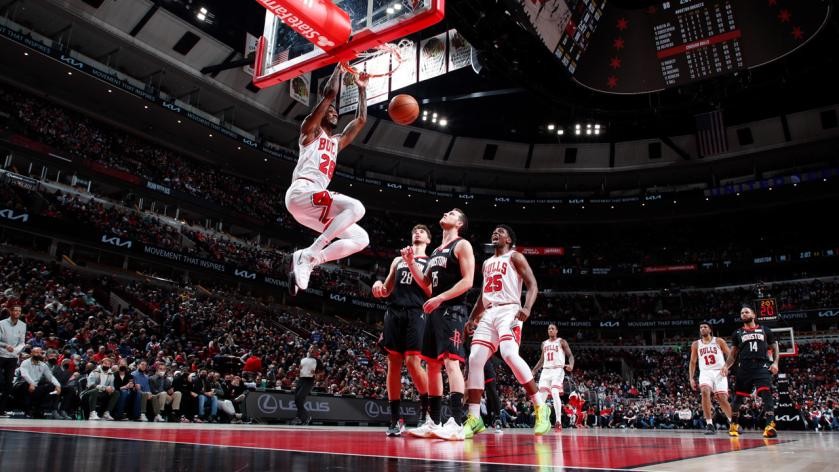 The Chicago Bulls look to continue their two-game winning streak as they host Toronto Raptors at the United Center. In their last meeting this season, Bulls defeated the Raptors on the back of  DeRozan scoring 26 points on 25 October.

Despite countless players missing time due to NBA’s health and safety protocol, Chicago Bulls have continued their domination in the 2021-22 season. Currently, the Windy City is on a two-game winning streak defeating the Lakers and Rockets at home. In their last ten games, the Bulls have won seven games averaging 113.1 points, 42.4 rebounds, 25.6 assists, 6.6 steals and 4.9 blocks per game while shooting 48.0% from the field. Chicago ranks ninth in the league giving up just 106.3 points per game while holding opponents to 45.4% shooting.

The Bulls are led by a resurgent Demar Derozan who is currently fifth in the race for the scoring title in the 2021-22 season. DeRozan is scoring 26.8 points per game with 5.2 rebounds and 4.2 assists for the Bulls. With Demar, Zach LaVine is averaging 26 points, 5.4 rebounds and 5.5 assists over the past 10 games for Chicago but has missed significant time due to the Covid-19.

The Toronto Raptors have had a difficult season so far as the tenth seed in the eastern conference. Raptors come to Chicago after a good run of fixtures as they defeated the red-hot Warriors 119-100, Kings 124-101, and fell short by two points against the Nets. In their last ten games, Toronto has won five games while averaging 105.5 points, 44.5 rebounds, 22.3 assists, 7.8 steals and 5.4 blocks per game while shooting 43.6% from the field. The Raptors have allowed 103.3 points, making them the seventh-best defense in the league.

For Toronto, Fred Vanvleet has been incredible as he is shooting 43.4% and averaging 20.1 points. Gary Trent Jr. is averaging 2.8 made 3-pointers over the last 10 games. But the biggest positive for the Raptors has been OG Anunoby. OG is averaging 19.3 points, 5.3 rebounds and 2.7 assists and immensely improved through the last few years.

The Chicago Bulls are clear favourites to win against Toronto Raptors at the United Center.  The Bulls will have an offensive advantage as they have averaged 109.3 points this season in comparison to the Raptors’ 106.4 points. Chicago also has the best home record of ten wins and just four losses giving them an upper hand over the Toronto Raptors. Historically speaking, the Windy City has dominated the fixture with 52 wins compared to the Raptors’ 44 wins.

How to watch Chicago Bulls vs Toronto Raptors?

The Toronto Raptors vs Chicago Bulls game will be locally broadcast on NBC Sports Chicago. The game will also be available on the NBA’s League Pass platform.