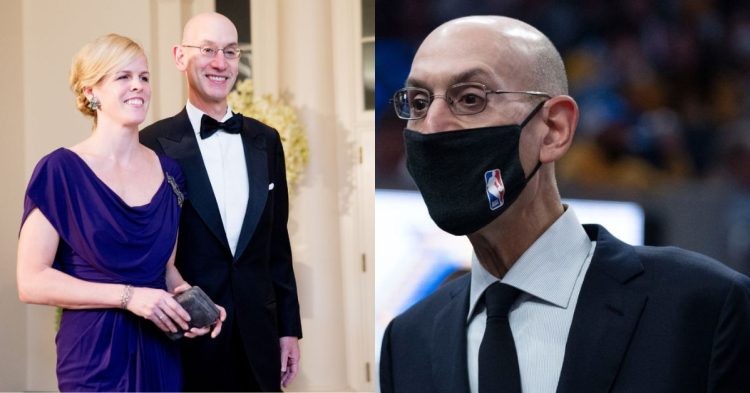 Adam Silver with his wife Maggie Grise and him wearing a mask (Credit: Twitter)

Adam Silver is the NBA commissioner and the organizational leader for the league. He recently released a statement criticizing Brooklyn Nets star Kyrie Irving for his controversial and anti-Semitic post. We already know that Nets owner Joe Tsai was the first to call out Irving for his actions.

Not much is known about the NBA commissioner’s personal life. With that being said, let us take a look at his early life, family, and religious and cultural beliefs.

Silver is the 5th commissioner of the NBA. He joined the league over 30 years ago. Moreover, he has held several positions in the league from Chief Operating Officer to the NBA deputy commissioner and finally the NBA commissioner. However, not many people know about his beliefs. Adam Silver belongs to a Jewish-American family and is a Jew by his religious belief and practices.

His father Edward Silver was a lawyer, specializing in labor law. He worked at a Jewish firm called Proskauer Rose. The firm is best known for its willingness to cross traditional and cultural hiring norms. Simply speaking, it was a firm with the willingness to employ Jewish lawyers. Moreover, It would interest some people to know that former NBA commissioner David Stern worked in the same law firm.

Young Adam Silver had a passion for the law and decided to follow in his father’s footsteps. Therefore, He finished high school at Rye Highschool and went on to complete his degree in political science at Duke University. Some of us might be aware that Duke is the former home of NBA athletes like Zion Williamson and Jayson Tatum.

Silver went on to attend the University of Chicago law school and soon became a law clerk and eventually a lawyer himself. Additionally, Adam Silver and his wife Maggie Grise are religious and devout Jews. They have two daughters from their marriage, which began in 2015.

People often identity themselves with their religion and beliefs. Hence, it became important to specially mention the religious beliefs and faith followed by NBA Commissioner Adam Silver.