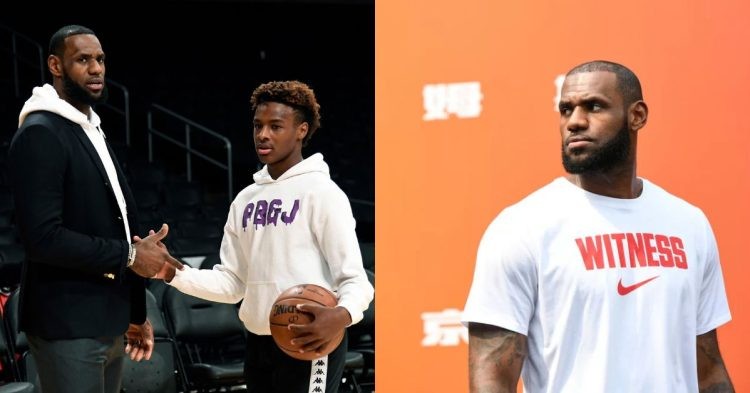 There haven’t been many father-son duos in sports history so far. That could well be LeBron James and his son Bronny James’ achievement as they edge closer to playing together in the NBA. We all know how talented Bronny is, and it seems like it’s only about time since he joins the league.

Together with his younger brother, Bryce, Bronny has become one of the best high school basketball players in the whole country. In addition to that, his highlight res have hen truly entertaining, just like his father’s. Given his potential, Nike announced that they have signed the young prodigy to an NIL contract. Just like his dad, he has also made his way into Nike’s long list of athletes at 18 years old.

Would LeBron James have had any say in Bronny James’ new deal with Nike?

It may be a good day for the James family as Bronny takes another step closer to playing in the NBA. However, many fans across the world have slammed LeBron James and his son for using nepotism as a tool to take the family to greater heights. One Twitter user wrote, “only because of daddy”.

Only because of daddy

Another user has claimed that money ruins young players’ career. They said, “Money is about to ruin the kid already, this so why you will never see any superstar kid’s reach goat status anymore.” To be fair to Bronny, he has been seeing the money since a young age, given that his father is one of the richest athletes alive.

Many claim that King James had a say in Nike securing his son’s signature. In recent times, the LA Lakers star has come under fire on a few occasions. The reason for that will be the allegations of him and Nike regarding China.

Moreover, the 37-year-old is one of Nike’s biggest athletes. Hence, fans believe they have good reason to think that James contributed in his son’s new deal. Despite what many claim, both Bronny and LeBron will be looking to do what they do best, which is playing their game on the court. Ultimately, their goal is to play together in the NBA, a dream that they are getting closer to.