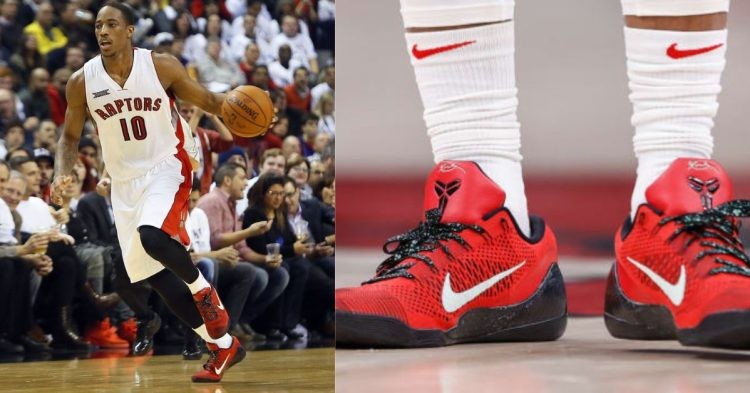 Kicks in the NBA have come a long way over the years. The top players even use the shoes they were in to send a message. Basketball shoes have now become more flashy and stylish compared to before. In addition to that, shoe deals have also become more lucrative. One of the players that have been in the headlines for his recent money moves is Chicago Bulls star DeMar DeRozan.

A couple of days ago, reports suggested that DeMar re-signed with Nike. The American company tied him to a four-year deal that ends in 2026. DeRozan will also continue to be the face of Kobe Bryant’s signature line. In an interview with Sports Illustrated, the 32-year-old revealed his favorite Kobe shoes.

He said, “That’s a tough one. I’d probably have to go with the Kobe 9s or the 3s. I loved them because they were so different. He always had the conventional low top, but I loved those and played in them a lot this year and they’re still one of my favorites.”

The American revealed that the Kobe 9s and 3s are his favorites out of the lot. The 9s boasted the best traction, cushion, and material that helped the player to make sudden movements. The Kobe 3s may not be the best-looking ones. But for NBA players, it’s all about efficiency. The fit, traction, and leather on the shoe made it perfect for any to wear.

DeMar has been wearing Kobe’s shoes for a while now. He even revealed once that it felt great to wear his idol’s shoes to honor one of his favorite players.

“To be able to wear your idol’s shoes to honor one of your other favorite all-time players… it’s great.”@DeMar_DeRozan breaks down his Argentina-themed Kobe 4 Protro worn on @manuginobili‘s jersey retirement night 🇦🇷 (via @Nike)#MambaDay | #GoSpursGo pic.twitter.com/lPzvx1KqEl

The Kobe shoes have been iconic, even after his passing. Although Nike gave us a scare when the former Lakers player’s contract with them ran out, they brought it back this year. In March, Kobe’s wife, Vanessa, revealed on Instagram that the shoes will be back.