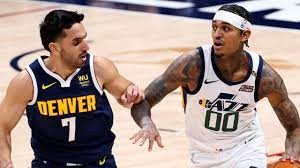 The Denver Nuggets will host the Utah Jazz on Sunday, January 16, in the second game of a back-to-back for the home team. The Nuggets are coming off of a dominant win against the Los Angeles Lakers, while the Jazz is looking to end their four-game losing streak.

The Denver Nuggets have steadily improved in the 2021-22 NBA as they are currently sixth in the western conference. Denver has had some trouble of their own at the offensive end, ranking 23rd in the league and averaging just 106.4 PPG. While they are slightly better at home, where they average 108.0 per game.

The best player in the world and LeBron James#NikolaJokic #NBAAllStar pic.twitter.com/SebRu0mjmh

The Denver Nuggets are led by Nikola Jokic who is averaging 25.3 points while shooting 56.7% from the field and 35.8% from the 3-point line with 13.9 rebounds and 7.2 assists. With the absence of Jamal Murray and Micheal Porter Jr., Will Barton has been great with his 15.3 points and 4.2 assists.

The Utah Jazz has been one of the top teams in the 2021-22 NBA season. But in the recent few games, the Jazz has lost its groove, losing four straight games. Utah currently leads the NBA in points per game, averaging 115.1 PPG this season.

The Utah Jazz is led by Donovan Mitchell who is averaging 25.7 points with 3.8  rebounds and 5.1 assists. Spida Mitchell also leads the team in steals with 1.6 steals per game. Forward Bojan Bogdanovic is the second top scorer for jobs with his 17.9 points and 4.1 rebounds.

Although both teams have already met twice this season and the Jazz won both games, this time the Nuggets come to this match with a better sequence and momentum than their opponents. Additionally, playing in front of their fans this Sunday at the Ball Arena is one more advantage for the Nuggets.

So, the Denver Nuggets are more likely to win the game and improve their home record this weekend.

How to watch Denver Nuggets vs Utah Jazz?

AT&T SportsNet Rocky Mountain and Altitude will provide local TV coverage of the game between the Jazz and Nuggets. Fans can also view the match online via NBA League Pass.