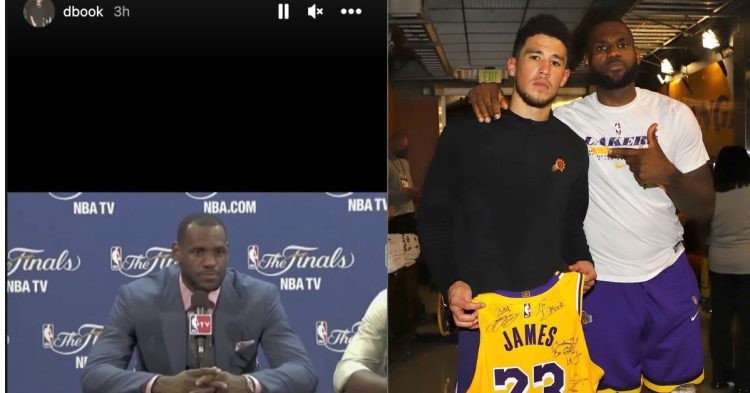 LeBron James is one of the most influential athletes on the planet. Apart from the skill and ability he has displayed on the court, LeBron has also become an inspiration for many sports athletes around the world. Moreover, he has taught many attributes and qualities to his fellow NBA players. This time around, James has done it for Phoenix Suns star Devin Booker.

Booker has had an eventful year so far, after becoming the cover star of the popular game, NBA 2K23. Many were against it as they claimed he hadn’t achieved enough to deserve the honor. That wasn’t the only hate he received. Over the years, many have called him out for being too emotional on the court, as well as being a ‘crybaby’.

Although he hasn’t directly addressed the trolls so far, he posted a cryptic image on his Instagram story. The image was a screenshot from LeBron James’ press conference back in the day.

In that press conference, the question for King James was if having so many people rooting for him to fail bothered him.

The LA Lakers star answered, “Absolutely not. Cause at the end of the day, all the people that was rooting on me to fail, they gotta wake up tomorrow and have the same life that they had before they woke up today. They got the same personal problems they had today. Imma continue to live the way I want to live, continue to do the things I want to do, me and my family will be happy with that.”

It seems like Bron has been an inspiration to Booker. The latter may follow the same words that came out of the 4x NBA champion’s mouth. The 37-year-old said that during the 2011 NBA Finals as the Miami Heat lost to the Dallas Mavericks. He claimed that the failure was not going to stop him from having more tries at winning titles. And eventually, he did achieve what he wanted to.

Similarly, if DBook wants to win a title to shut his haters up, he has to put in the work. During the 2021-22 NBA season, the 25-year-old averaged 26.3 points, 5.0 rebounds and 4.8 assists in 78 games, including playoffs. He could not lead the Suns to a title after losing to the Dallas Mavericks. Booker will have many more chances in his career and he would have to step up for his team like LeBron did.
Tags: Devin BookerLeBron JamesNBA
Previous Post