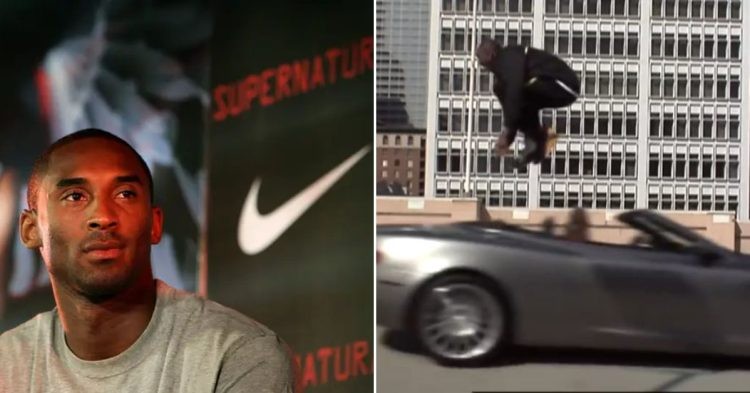 Late Kobe Bryant is known still today as one of the great legends of the NBA to be born. Apart from his successful career, his collaboration with Nike was quite popular. After appearing in a commercial for Nike, Kobe was all over the news. In 2008 Nike’s campaign for the Hyperdunk shoe kicked off featuring Kobe Bryant, who was the MVP of that year.

In the video, Kobe first holds a sneaker up to the camera telling viewers, “Do not try what I’m about to do right now.” Following this, he is seen jumping over a speeding Aston Martin DB9 Volante.

Following the campaign of Nike Hyperdunk with Kobe, it became ubiquitous over the world being followed in every NBA court and playground. With Kobe’s commercial jump of the car and securing Team USA’s redemption, over 80 NBA players wore the Nike Hyperdunk 2013. The campaign is considered to be the most highly regarded signature collection.

Five years after Kobe’s 2008 Hyperdunk commercial with Nike, reports emerged that the jump was fake and edited. While looking at the video carefully, one can notice that the edges of Kobe look questionable when he’s up in the air. Also, there was a slight transition the moment when the car enters the frame. Apart from this, the commercial was filmed from a straight-on angle with the camera.

Despite the rumors, the commercial provided to be a good idea for marketing at that time. Thus, the campaign’s massive hit marked a new beginning for the global brand Nike from TV to the internet. With the campaign, Kobe’s life turned to a new phase and he became popular among the people.

However, following Kobe’s death and his contract with Nike ending in 2021, his wife Vanessa Bryant renewed the collaboration. “We’re excited to announce our partnership with Nike is going to continue! I am so proud that my husband’s shoes are still the most worn by players on NBA courts and the demand for his shoes remains so desired by his fans around the world.” – Vanessa mentioned in an Instagram post.

According to sources, the collaboration included 11 signature Kobe Bryant shoes that were worn during his NBA career. The initiative was taken up to honor Bryant’s legacy and make sports accessible for the young athletes of today.

Kobe Bryant Estate and Nike have reached deal to continue a partnership, Vanessa Bryant announces. Nike is donating 100 percent of net proceeds of Gianna Bryant’s shoes to Mamba and Mambacita Sports Foundation – and sides will establish a youth basketball center in Southern Cali.