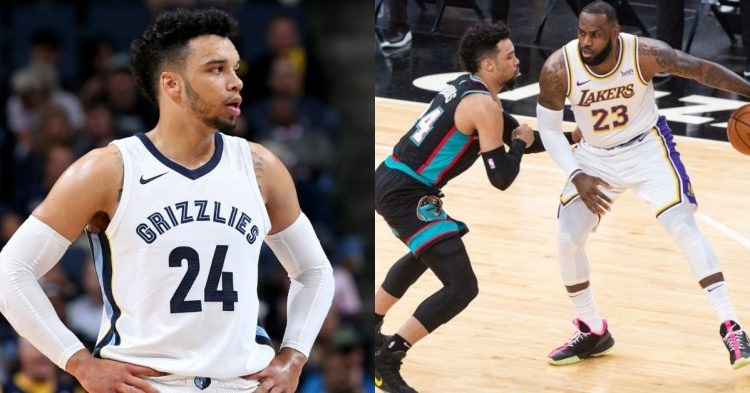 Los Angeles Lakers had a massive win against 2nd seed Memphis Grizzlies at Crypto Arena. The game was played at high intensity with both teams looking to grab an important win. LeBron James was all locked in for the game and looked certain of another huge production on the floor. So Memphis tried to put their best defender Dillon Brooks on him and tried double-teaming the king on regular basis.

Sadly for the Grizzlies, it didn’t work well for them, as LBJ still managed to score 23 points, dishing out 6 assists in the game. And Brooks had 9 points in 31 minutes of game-play. The Grizzlies were on 10 games winning streak, while the Lakers needed to bounce back from the loss against Sacramento Kings.

Taylor Jenkins and the Grizzlies targeted their defense at LBJ. Yes, stopping LeBron under his average could be seen as a victory for Memphis. But that allowed the rest of the Lakers team to run the game and emerge victorious in the contest.

When teams are planning for the game, they certainly concentrate on the best player of the opposite side. LeBron James is by far the best performer for the Lakers this season (again). The 38-year-old megastar is averaging nearly 30 points, 8 rebounds, and 7 assists this season. He is leading the team in every stat, or at a close second.

When Dillon and Grizzlies tried their tactics on LeBron, the 4-time NBA Champion LBJ understood the situation well. He changed his approach and helped his team with the spacing; allowing them to score easy baskets. In the important 4th quarter, when the Lakers were trailing by 11 points, LeBron played for 12 minutes but attempted only 4 shots. He rather had four assists in one period.

Still, with the help of the charity line, LBJ scored 10 points in the 4th quarter winning the game by 1 point for the Lakers. Fans were excited about the win and mocked 26-year-old Dillon Brooks for trying to guard the king.
Here are some of the fans’ reactions on Brooks guarding LBJ:

You have to respect a nobody “Dillon Brooks” trying to get some street cred. But he’s still a nobody. Walk in a city outside of Memphis and not a single person knows who you are playboy

Is Brooks aware that LeBron is literally left handed? Lol

LeBron was born a lefty lol

Dillon Brooks has been instrumental for the Grizzlies team so far. He proved to be their primary defender and also a playmaker in absence of Ja Morant. But guarding LeBron James is not easy. LBJ scored from various angles and used the double-team to his advantage.