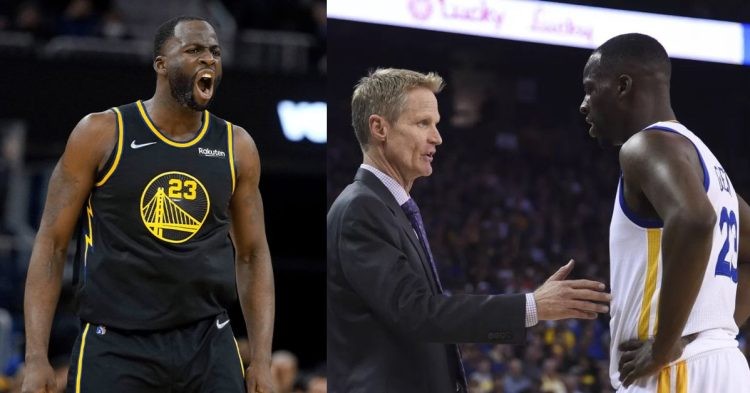 Over the years, we have witnessed many super teams dominate the NBA for a long time. Franchises like the LA Lakers and Chicago Bulls, had their fair share of continuous success. One team that definitely deserves to be along those names are the Golden State Warriors. They were able to build a dynasty with the help of world-class talents like Stephen Curry, Draymond Green and Klay Thompson.

This year, the Warriors won their seventh championship in their history. As all titles are, it was special, but it was more that because of the hate directed at the franchise in recent years. GSW built the base of their dynasty in 2015, before winning in 2017 and 2018 again. That marked their third title in four years.

One of the most underappreciated GSW personnel would be their head coach Steve Kerr. Although the players may be the ones to implement the ideas, it seems like the mind behind all the success is a genius as well. Draymond recently spoke about his coach to Caffeine and made some interesting revelations.

DG said, “When Steve Kerr took over the job, I remember the first training camp, he’s like, ‘ball movement, cut, stop standing and waiting for the ball.’ I’ll catch the ball at the top of the key, Steph on the wing, and he’s like, ‘Steph, cut’ and it’s like, ‘No, dude, I’m supposed to pass the ball to Steph right here.’ And he said, ‘Pass the ball and move without the ball, the ball will find the hands of the people that are supposed to get the shots.”

Kerr started coaching the franchise in 2014. And it only took him a year for him to win his first title with them. However, that may not be that surprising since the way he made the Warriors play was incredible. As Green mentioned, Steve brought the idea of offensive flow to The Bay. He made sure no player stood still even for a second and kept moving even without the ball. This was instrumental in the Warriors’ succeeding in the NBA.
Tags: Draymond GreenGolden State WarriorsSteve Kerr
Previous Post