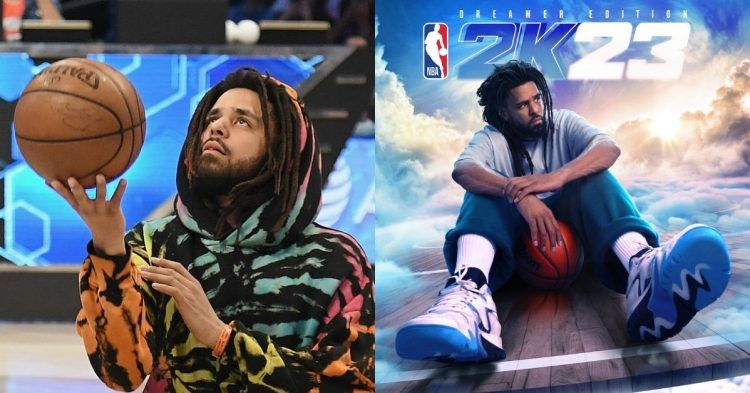 The release of one of the world’s popular games, NBA 2K23 is just around the corner. It is set to release on September 9th, which is just a week away. Till now, 2K has announced several new editions and game modes. We all know the great Michael Jordan is the star cover athlete, together with Phoenix Suns star Devin Booker.

Apart from that, 2K has announced very recently that world-famous rapper and singer J.Cole will now be a cover star of another edition of the NBA 2K23 game. It adds to the long list of editions that the game will have from next week.

The Dreamer Edition of the game will be one of the most limited and deluxe of all video games in 2022. In the past, we have seen NBA players don the cover of 2K games over the years. It is an honor for a player and it also helps them boost their reputation and image in the league. However, this time around, 2K have gone for someone who isn’t a professional basketball player to be their cover athlete.

J.Cole will play a pivotal role in the MyCAREER series of NBA 2K23

The American rapper will be part of the MyCAREER mode where he will also meet other stars in the American industry. According to 2K, “MyCAREER will feature Dreamville musicians Elite and Bas as they help players befriend J. Cole and capture the hearts and minds of The City.”

Dreamville is the record label that Cole founded in 2007. Elite is the music producer for the label whereas Bas is a rapper and musician signed to the label. 2K’s Vice President of Global Marketing Strategy, Alfie Brody explained the decision to bring J.Cole on board.

He said, “The sheer scale, depth, and talent featured in this year’s MyCAREER creates an unparalleled experience within NBA 2K23, At the top of that list of talent is our first cover star who truly sits at the intersection of basketball and music. Bringing a visionary like J. Cole and DREAMER into the creative process for both the game and the soundtrack showcases the pillar of culture that NBA 2K23 has become.”

J.Cole reveals what fans can expect in the future for 2K23 and his brand

Over the years, many rappers have featured in the game. One of the most popular ones will be Drake, who first appeared in 2K20. It may not be a surprise that 2K has decided to strengthen the relationship between music and basketball in the game. This year, they have done it with Cole, who also reacted to the “dream” announcement. He tweeted, “This sh*t crazy.”

In addition to that, he also mentioned spoke about how music has been important in the 2K games. He said, “NBA 2K has long been a place to discover new musical talent through their game and continues to be a gold standard for showcasing all things basketball culture.”

“It’s been an amazing journey to not only appear on a cover of this year’s game, but to be part of the MyCAREER storyline, soundtrack and bring the DREAMER brand into NBA 2K. There’s also more to come, so watch out for all things Dreamville and DREAMER brand drops during Seasons and for Bas and Elite in this year’s MyCAREER story”, the rapper added.

The passion that he has for the sport is known around the world. He signed with the Scarborough Shooting Stars to play in the Canadian Elite Basketball League in early 2022. Despite performing decently, he had to take a break from his basketball career to emphasize on his music. He may not be a basketball player, but being able to feature on the cover of the game will be a dream come true for the Grammy winner.