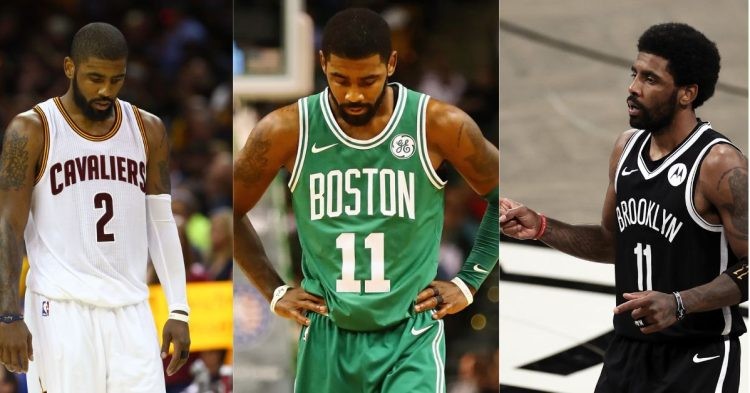 Kyrie Irving is perhaps one of the most skilled players in the NBA. His ability to score and finish at the rim is otherwordly. Irving has been in the league since 2011 and has had quite an interesting career. He is now 30 years old and has been in three teams so far.

Irving was drafted by the Cleveland Cavaliers in 2011. He was almost immediately considered an all-star level talent. However, his team was unable to make a significant impact in the NBA postseason. Therefore, when LeBron James decided to return to the Cavs, Irving was one of the players who benefited the most from this decision.

LeBron and Kyrie managed to carry Cleveland to 3 consecutive trips to the NBA Finals. They lost to Steph Curry and the Golden State Warriors in 2015. However, Kyrie was injured for the majority of this series. The Cavs managed to win the next year after being down 3-1 to the Warriors. This gave Kyrie his first and only NBA championship so far.

Tensions between Bron and Irving soon increased and Kyrie requested a trade following the 2017 season.

Kyrie had a somewhat controversial stint with the Boston Celtics

Kyrie got his wish and was traded to the Celtics to play with a young core of Jayson Tatum and Jaylen Brown. Adding Kyrie did not get the team over the hump. He was injured in his first year with them and they were eliminated by Giannis Antetokounmpo and the Milwaukee Bucks in his second year there.

Kyrie soon moved on from the Celtics and decided to pair up with Kevin Durant. This abrupt joining and leaving the Celtics within a span of 2 years drew much criticism on Irving. Several analysts and sportswriters considered him to be a “toxic” player who ruined the team chemistry for the Celtics.

Considering they performed worse in the NBA postseason after recruiting him, several people thought there was much truth to these statements. The same statements may have also prompted Kyrie to leave Boston.

Irving and Durant have been unable to win a title with the Nets over the last 2-3 years. During their first year together as teammates, KD was injured and still rehabilitating from his 2019 Achilles injury.

In the second year, they were eliminated by Giannis Antetokounmpo and the Milwaukee Bucks. However, Irving was injured in game 3 and did not play in the second half of this series that went 7 games.

Their third year together was filled with drama due to Kyrie not taking the covid vaccine. Additionally, James Harden demanded a trade midway through the season. This seemed to have caused tension and turmoil in the Nets franchise and they were eliminated in the first round by the Boston Celtics, Kyrie’s old team.

Considering the way things are going, the Nets might not invest their future with both these stars. If that indeed turns out true and Irving doesn’t win another championship, then his time with LeBron and the Cavs would be considered his most successful moment.