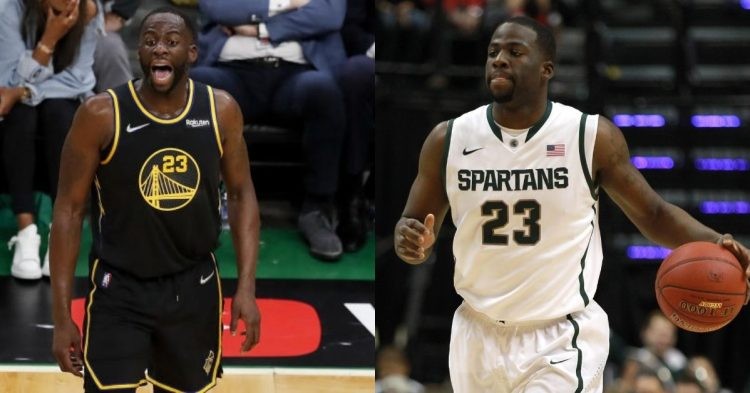 Draymond Green is considered the heart and backbone of the Golden State Warriors. He has played a huge role in their years of dominance. Additionally, one could argue that his playstyle compliments Steph Curry and Klay Thompson the most.

Green is 32 years old and clearly at the back end of his career. His avid fans must be wondering how many teams he has played for so far.

Many analysts claim that Draymond owes Steph and Klay for his championships. They are of the opinion that he is extremely fortunate to be in the position he is in. There aren’t too many aggressive “power forwards” with bad shooting and scoring abilities to win multiple NBA Finals. Be that as it may, it is clear that Green always brings something to the table that the Warriors don’t have but need; his defensive abilities and playmaking.

However, this is not all that Green is known for. He is famous for the vocal and physical leadership of the team. Therefore, one must wonder whether Draymond has always been this way in other teams.

Draymond was part of the Saginaw High school basketball team. This high school was located in the state of Michigan. There he averaged 12 points and 11 rebounds per game and performed at a level that would earn him a spot on The Michigan State Spartans men’s basketball team.

This was the second official team he became a part of throughout his career. There he averaged a solid stat line of 16.2 points, 10.6 rebounds, and 3.8 assists during his final year. Therefore, this qualified him for the NBA Draft. In it, he was selected in the second round as the 35th pick.

Draymond Green has definitely earned his spot with the Warriors starters. Moreover, he has been nothing but loyal to the team and never once attempted to quit on them or look to leave a bad situation. He stuck with them through their ups and downs. Therefore, today he is a 4x NBA Champion just like LeBron James, Steph Curry, and Shaquille O’Neal.