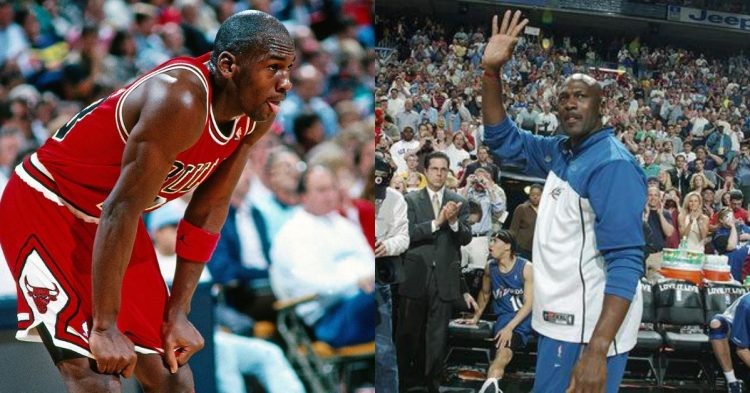 Michael Jordan is the most decorated basketball player of all time. He has a perfect 6-0 finals record and has never seen a game 7 in the NBA Finals. Jordan is widely recognized as the GOAT and there is a solid case to be made for that.

He is the only person to ever win 6 Finals MVPs. Every time Jordan played a full season from his 3rd year to his last year with the Bulls he won a scoring title. That makes a total of 10 scoring titles during his career. Only Wilt comes close with 7. Apart from these two no one else has more than 4.

Throughout his career, Jordan came out of retirement twice and went on to play for two teams. And let’s just say Jordan has been great at whatever he does. Whether it’s playing basketball or making shoes.

Jordan started his NBA career after being drafted 3rd by the Chicago Bulls. Yes, Michael Jordan the greatest player of all time was drafted 3rd during the 1984 NBA Draft. Mike came into the league and immediately started tearing it up as he went on to average 28.2 points during his rookie season.

After 6 unsuccessful trips to the Playoffs, Jordan finally hit it big and won his first championship with Scottie Pippen in 1991. He then led the Bulls to a threepeat and became the first player ever to win 3 Finals MVPs in a row.

On This Date 06/28/1993: 🐐 Michael Jordan was on the cover of Sports Illustrated after he and the Chicago Bulls defeated the Phoenix Suns to win their 3rd championship.
Michael Jordan was named Finals MVP. It was his 3rd of 6.#MJ https://t.co/2ejYqku7ph pic.twitter.com/jWIHq1GsB1

Then Jordan’s career took a weird route, after the loss of his father Michael Jordan retired from Basketball and decided to pursue a career in Baseball. He eventually came back in March of 1995 and the very next year he led the Bulls to the NBA Finals again. Mike went on to lead the Bulls to another 3 peat and won 3 more Finals MVPs.

Then in 1998, he called it quits again and retired from the NBA, but he couldn’t stay away for long. Jordan came out of retirement for the second time in 2001 and signed a 2 year deal with the Orlando Magic.

On this day in 2001, Michael Jordan made the announcement he would come out of retirement again

He donated his salary to relief agencies working with victims from the 911 terrorist attack pic.twitter.com/r1nRuhZaG8

His salary for the 2001-02 season was donated to victims affected by the September 11 terrorist attack. When his contract with the Orlando Magic ended, Jordan finally left basketball for the final time. A fitting end for an amazing career. After he retired his jersey made it to the rafters of two teams, The Chicago Bulls and The Miami Heat. Interestingly enough, Jordan never even played for the Miami Heat.
Tags: Chicago BullsMichael JordanOrlando Magic
Previous Post