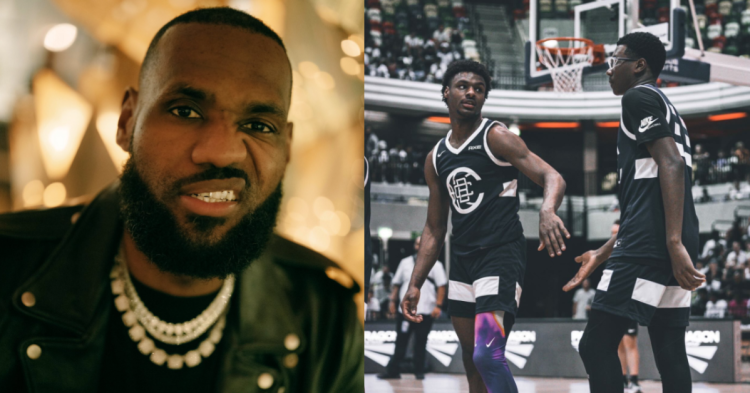 LeBron James want to play with Bryce and Bronny in the NBA (Credits; @kingjames)

It’s no secret that LeBron James has expressed his wish of playing with Bronny in the NBA. He has been pretty explicit about the fact that he wants him to make it to the league. But importantly, LeBron wants Bronny to play with him together. However, his youngest son Bryce Maximus is also playing high school basketball at an elite level. Therefore, LeBron is determined to play with both of his sons as soon as possible.

LeBron James has been one of the best players in the league consistently for the past two decades. By averaging the highest points-per-game in the league at the age of 37, LeBron shows no signs of retiring from the sport anytime soon. LeBron is also one of the richest athletes in the world. He gets tons of lucrative endorsement deals and has been the face of NBA for nearly a decade. Therefore, his public figure image, philanthropy and smart investment deals has helped him become one of the athletes to reach the ‘Billionaire’ status.

According to Shams Charania, the new Collective Bargaining Agreement between NBA and Players Association have reduced the draft eligibility from 19 to 18. This modicfication would allow players to join the league right after high school. With Bronny about to reach the age of 18, fans wasted little to no time in speculating the influence of LeBron in the agreement.

The CBA regulations and the reaction of fans on social media

The new CBA regulations between the NBA and Players Association sought out to many problems like mental health of athletes. It also looked into the creation of generational wealth after retirement. But the highlight of the regulations were the draft age eligibility from 19 to 18.

This regulation in particular has caught more fire than the others because they believe LeBron had a huge influence on this change. It is because LeBron is at the twilight of his career and would love to end it with Bronny and Bryce playing alongside him.

NBPA: “Are you sure that’s a good idea?”

The CBA regulations would actually be enforced from 2024, making it implausible for Bronny to skip university for the draft. However, it would be sensible for Bryce as it would take him three years instead of four, to declare for the Draft.