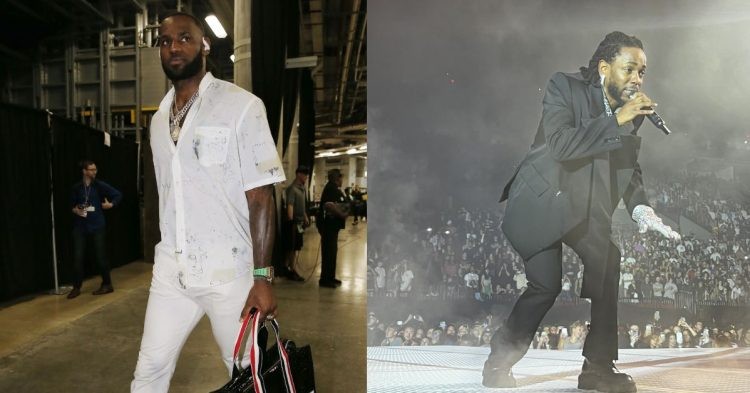 LeBron James has always been a huge music fan. He has revealed many times in the past that he was a big fan of rap. Earlier this year, he let fans in on his favorite albums. They included Dr. Dre, Snoop Dogg, JAY-Z, The Notorious B.I.G, and Nas.

It seems like LeBron‘s favorites go back to the classics. However, they are not the only rappers he supports with all his heart. Kendrick Lamar, the famous rapper to gain popularity in the early 2010s, is also one of them.

Last weekend, Lamar held a concert in Vancouver. As usual, the sold-out arena had fans on their feet as the rapper was putting on a show. But one certain individual to catch everyone’s eyes was the NBA star.

Initially, LeBron was with his wife Savannah on the platform. The couple was enjoying a drink with each other. Together with that, they also danced together to the song played.

Although that shows LeBron having the utmost amount of fun, that was not the highlight of the night. Later on, LeBron removed his white jacket to go down and show his moves in front of the fans. A Twitter user posted the video with the tweet, “Lebron James turning up to Baby Keem and Kendrick Lamar’s family ties”.

The 37-year-old was dancing to the song Family Ties by Kendrick and Baby Keem. As the rappers stole the stage with their performance, LeBron did the same below it as well. Many fans were surprised to see this side of LeBron as one even said, “That Lobos was HITTING”.

That Lobos was HITTING 🤣🤣🤣pic.twitter.com/VDUkIaAu1X

Lobos is a tequila brand that the LA Lakers star has invested in, together with other NBA stars such as Draymond Green and Anthony Davis. Its official name is “Lobos 1707 Tequila“. Although it is unknown whether LeBron was actually drinking tequila on the night, it does look like he had a couple of drinks.

Vancouver!! Thank you for the hospitality over the weekend. 1st time in your beautiful, wonderful city! @kendricklamar you’re 1 of a kind my brother! SPECIAL show by a SPECIAL person! Appreciate the love! 🙏🏾✊🏾🤎👑

The night was a memorable one for all, including LeBron, Kendrick and the thousands of fans present. Kendrick came on to give the fans a night that they could never forget and he did just that, as did James. He even tweeted about how beautiful his first time in Vancouver was.

Fans did not stop there with their reactions. Twitter was filled with the people who attended the concert.

It really seems like LeBron stole the spotlight with his moves. One fan even mentioned about how Lamar was on his and LeBron on his left. That must have been a sight to see. The night would have surely made the fan’s year.  If that wasn’t enough, another fan even said, “Thanks for your energy, King! We could use a Basketball Team too.”

Thanks for your energy, King! We could use a Basketball Team too. Just saying… 🤘🏽🔥 🏀 pic.twitter.com/8EfED3zSTe

Vancouver did have an NBA team for a few years, from 1995 till 2001. The team had to be relocated to Memphis and then the Memphis Grizzlies were born. If the fan’s wishes come true, LeBron might have played a part in it since he enjoyed his time in the city.