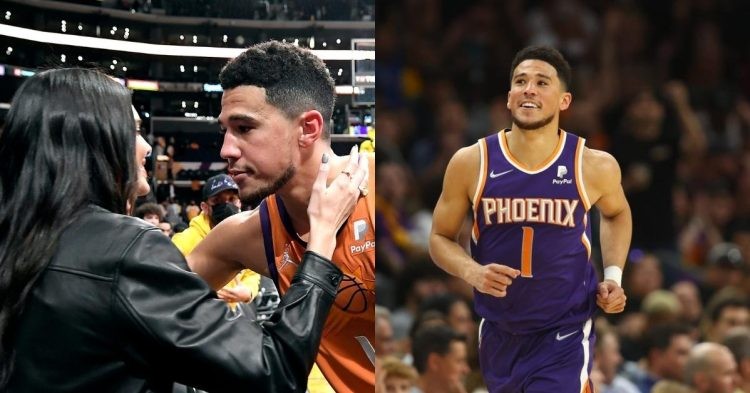 Devin Booker and Kendall Jenner’s breakup has been blowing up on Twitter. Everyone has something to say about it when such a high-profile relationship ends. The end of their relationship has led to a lot of memes and a lot of them involve Kendall’s other NBA exes like Blake Griffin, Kyle Kuzma, and company.

Kendall Jenner has reportedly traded Devin Booker in exchange for ‘space and time apart,’ per @enews.

There’s reportedly a chance, however, that Jenner could re-acquire Booker at a later date. https://t.co/oq3e9hG660

This is just the result of what seems like a proper meme fest on Twitter at the moment. Even though this probably sucks for Dbook he has to look at the bright side of things.

Devin Booker might finally be free from the Kardashian curse

Ah, the Kardashian Curse. Time and time again we have seen talented young men fail and lose themselves after getting involved with the Kardashians. Booker was no exception. When he started dating Kendall Jenner he wasn’t known as the guy who choked away a finals series against Giannis and the Bucks. Instead, people believed that he was heavily underrated.

Devin booker is now free from the Kardashian/Jenner curse https://t.co/hM6dnTwWiv

Booker’s fans have been extremely ecstatic and vocal about how glad they are now that he is finally free from the curse. Now, if after all of this Booker doesn’t show up and perform next season then his fans will be all out of excuses to make for him. With Chris Paul already at 37, the Suns are on the clock, and if they don’t win soon. Then they might not win for a long time.

Booker has all the tools to make it happen and if he doesn’t then I’m afraid Twitter will soon become a meme fest at his and his team’s expense.