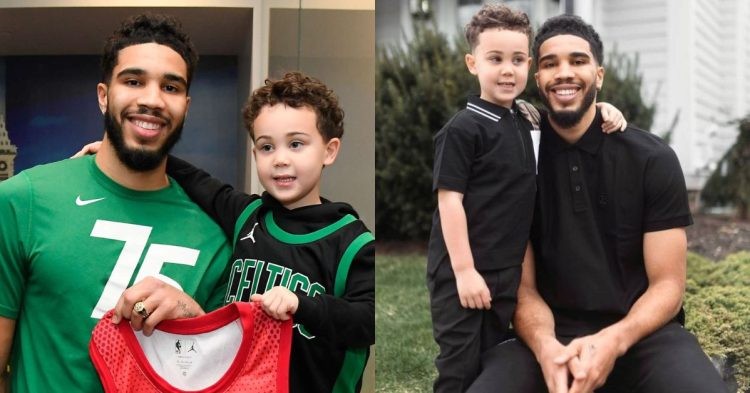 Jayson Tatum is one of the best young players in the NBA right now. It almost seems as if he has been in the league for a long time. It is mainly because of the way Tatum portrays himself and displays his game on the court. Tatum might be just 24 years old, but he has a 4-year-old son.

For those who don’t know, JT’s son’s name is Jayson “Deuce” Christopher Tatum Jr. The Boston Celtics star welcomed the light of his life back in 2017. That was an unforgettable year for the player. The Celtics drafted Jayson as the 3rd overall pick in the 2017 NBA Draft. Just six months later, he welcomed his son, Deuce, with Toriah Lachell.

Many may not know who the mother of Deuce is. It is none other than Toriah Lachell, who has kept herself away from the cameras that always follow her son and Jayson Tatum. Toriah is from Missouri. Her mother is Julie Gibbs, and her stepfather, John Gibbs graduated from Northwest High School in the same city.

According to various reports, Jayson met Toriah when he was in high school. He did his education at the Chaminade College Preparatory School in Missouri and it is unknown whether Toriah went to the same school. It seems like the pair dated for a few years before Tatum went to the NBA. Lachell became pregnant in 2017 when Tatum was drafted into the league.

Many sources suggest that Lachell and Tatum are not together anymore, but still play a pivotal role in co-parenting their son Deuce. Toriah now runs her own hairstyling business online and seems to be doing well in her professional life. On the other hand, Jayson is also enjoying a good time in the NBA and brings Deuce to games from time to time.

One would think that it is quite tough to be a committed father at such a young age. However, it doesn’t seem like that’s the case for Jayson. During a press conference, he let the world in on some interesting details about how he perceives fatherhood and how he is an example to other young fathers out there. He said, “I think it’s the coolest part for me. I don’t know if it’s intentional as much as it’s just natural and what we do.”

In addition to that, Tatum also mentioned that it feels like he is growing up together with Deuce. It would not be that surprising for fans to hear that considering the Celtics star’s age. Every time we see Tatum on the court, it would be safe for us to assume that Deuce is somewhere in the crowd rooting for his dad as well.

One of the main things that fans admire about Tatum is how loving and affectionate he is with his son Deuce. In the current generation, it may be missing in many people’s lives. He realizes that he has a platform where he can encourage other fathers to be present for their children.