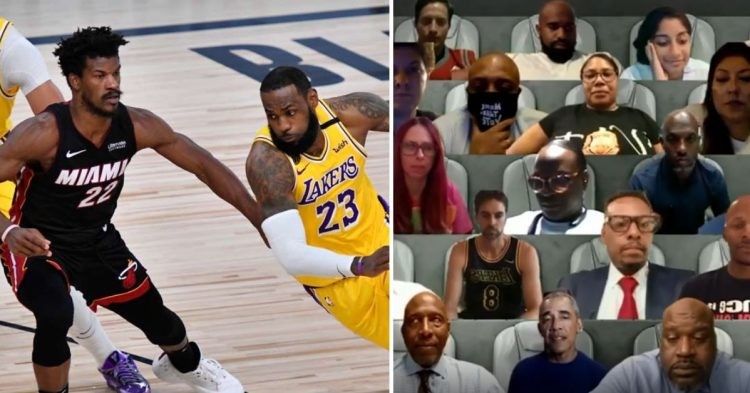 As NBA Finals Game 1 between LA Lakers and Miami Heat tipped off at 9 PM ET, several NBA greats turned in to attend the game as virtual fans. Ex-Lakers Shaquille O’Neal, Kareen Abdul Jabbar, and James Worthy were present in the front row. In addition, NBA fan Barack Obama was seen in the front row as well.

.@BarackObama, @SHAQ and other stars are tuning in for the #NBAFinals as virtual fans ⭐️ pic.twitter.com/P5NOMHdioH

Lakers are up 65-48 at halftime with Jimmy Butler limping back to the locker room. This 26 point turn around is a welcome sight for all these Lakers virtually present on the court. Kareem Abdul Jabbar, a 6 time champion with the LA Lakers always attends these finals. And after the sad demise of Kobe Bryant, this championship is even more special for the Lakers.

Teammate and close friend of Kobe Bryant, Pau Gasol was also seen in the virtual audience rocking the Mamba edition Lakers Jersey. Since NBA on TNT crew is not covering the NBA Finals, Shaq was also present in the virtual fans sharing a seat with president Back Obama as he was giving a speech.

Danny Green, Kentavious-Caldwell Pope, and Anthony Davis are putting up a show for all these Laker-fans cheering for them. 3-time NBA Champion with the Miami Heat and LeBron’s ex-teammate Dwyane Wade has sworn his allegiance to his former team in this series. 54-76 is definitely not what he came for, however, there’s a quarter and a half left for Heat to catch up.