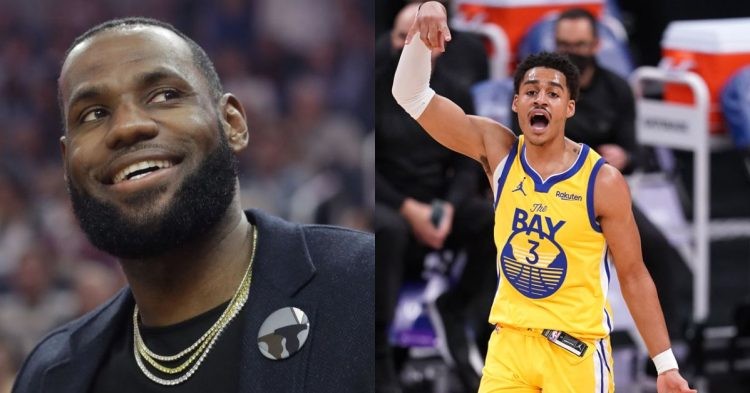 The 2022-2023 NBA season has finally begun. LeBron James and the Los Angeles Lakers have not gotten off to the best start. They have lost every single game so far and currently have a record of 0-3. Despite this lack of success, King James recently showered high praise on Golden State Warriors star Jordan Poole.

Nothing that LeBron says or does goes unnoticed by the NBA and basketball world. James is somewhat notorious for his ability to recruit star talent and make his team a championship contender. Most of us know that Poole just signed a 4-year contract worth $140 million with GSW a few weeks ago. Be that as it may, The Chosen One’s comment has the NBA world making wild speculations.

One must wonder what the 4x NBA champion praised Jordan Poole for and how the general public view this situation.

JP has certainly proven himself to be an invaluable asset to the Golden State Warriors. He was a crucial part of their success last season. Determined to prove he is worth his money, Jordan went off on a scoring streak against the Phoenix Suns.

This game ended in a blowout loss for the Warriors. However, that does not diminish what Poole accomplished in this game. When it seemed like none of the stars, with the exception of Steph Curry, really had it going, he stepped up and knocked down bucket after bucket to keep his team in the game. This seems to be something Lakers guard Russell Westbrook is unable to do. Therefore, fans made the ruthless comparison instantly.

Trade Westbrook for him

LeBron clearly noticed this and sent out a tweet in the aftermath of the game, “Jordan Poole is so cold (Ice emoji)”. That led a host of NBA fans to speculate that Poole is likely to be a “future Laker”.

Other Warriors fans had a problem with this and argued that he will remain a Warrior. There is no arguing that the Los Angeles Lakers could use Jordan’s skillset in order to become contenders. Additionally, we know LeBron usually gets what he wants when it comes to his preference for teammates.

no he will always be warriors.

In any case, this has led the NBA world to presume there are chances for Poole to become a Los Angeles Laker. Despite the current team’s lack of success, the Lakers are considered basketball royalty and always have a chance to attract stars. Draymond Green is also on good terms with King James despite their history and could become a future Laker as well.

LeBron definitely has the right to compliment whomsoever he deems worthy. However, it would be prudent to ensure that these kinds of tweets on social media do not ruin the team chemistry and dynamics of an already struggling team.