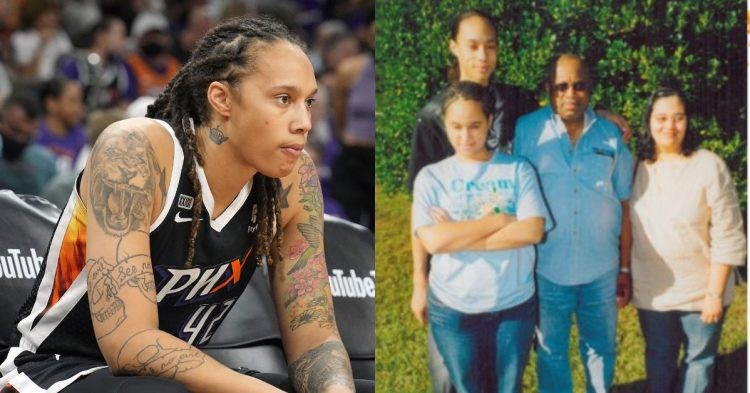 Brittney Griner and Raymond Griner with their family (Credits: Politico and LatestInBollywood)

WNBA Star Brittney Griner is no stranger to challenging situations in her life. As a kid, she was often bullied for various aspects of her personality, including her height and voice. Most recently, she got arrested and detained in Russia over allegations of smuggling narcotics into the country. After nearly 300 days, she was released by the Russian authorities in a prison swap with the US.

There is another part of her life regarding which she had to face some trouble, her sexuality. As must be known widely among WNBA fans by now, Brittney identifies as a lesbian. She came out publicly as a lesbian in an interview with SI.com in 2013. But she had, obviously, told her parents about this a lot earlier, back when she was in high school.

Although her mother supported her decision, Brittney’s father, Raymond Griner, had a hard time doing that. In her book “In My Skin: My Life On and Off the Basketball Court“, authored by herself and Sue Hovey, Brittney provided insights on how it all went down.

“Of course I was still nervous about my dad.” Brittney wrote. She had already revealed to her mother earlier that she was a lesbian. She was only worried about how her dad, who was an ex-marine, would react to this news.

And then the day came. One day during basketball practice, she got a call from her mother. “Your dad knows”, she told Brittney. Apparently, her dad had received a call from the mother of one of Brittney’s teammates, who had also just discovered that her daughter was gay and already knew about Brittney. “I could feel the panic rising inside me. I packed my gym bag, walked to my car, and drove home.”, she wrote in her book.

Her father was in the garage when she reached home and immediately confronted her about this. “Something you need to tell me?”, he asked, visibly pissed off. “You’re dating girls, ain’t you?”. “Yeah, I am”, Brittney answered, following which, her dad started slamming tools around the garage and then started yelling.
“I ain’t raising no gay girl in my house! You can pack your sh*t and get the fu*k out!”, and shortly after, he stormed off. Later inside their house, this confrontation continued. “This is your doing?”, her dad asked her with a tone of disgust in his voice. “Yes, this is me. And it’s been me for a while”, Brittney answered.

Brittney Griner was born a woman, the daughter of Sandra, and Raymond Griner is neither transgender nor a man. She is a lesbian who came out of the closet on the 11th of February, 2013

This argument had been a long time coming, as Brittney had never explicitly revealed her sexuality to her father before, but had indicated it through her clothing. “My dad had seen my boxers in the laundry and asked about them, and I had said, ‘They’re mine!'”. So, Raymond did have some suspicion regarding this.
But although Brittney’s father took his time in accepting her daughter’s sexual orientation, he finally did accept it and allowed her to be herself.
Tags: Brittney GrinerNBARaymond GrinerWNBA
Previous Post