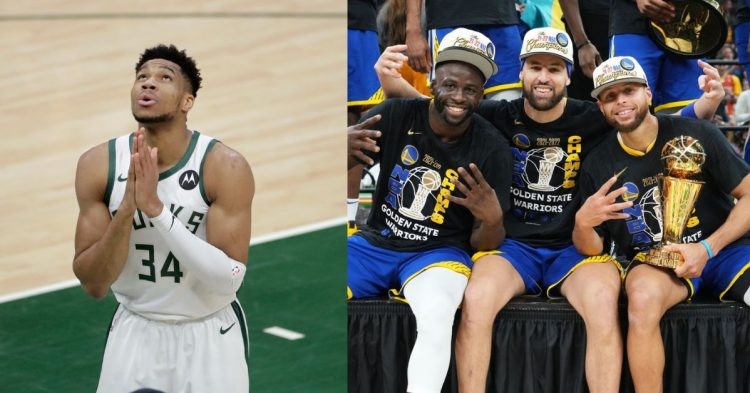 Giannis Antetokounmpo and the Milwaukee Bucks were eliminated from the NBA playoffs in the second round. Khris Middleton was injured with an MCL strain and did not play in the series.

The Boston Celtics eliminated them in 7 games and eventually went on to face the Golden State Warriors in the NBA Finals.

The Warriors had not been to the Finals since 2019. Several analysts had considered Golden State’s time of dominance in the Western Conference over. However, they managed to prove all these analysts and “basketball heads” wrong by winning this year’s championship. This has earned high praise from the previous year’s NBA Finals MVP Giannis Antetokounmpo.

There are several teams in league history that have never even made the NBA finals. Additionally, even if they managed the feat, it is highly unlikely they were able to do it again and again over a stretch of time. Golden State Warriors has proved to be an exception in this regard in the last eight years.

Giannis knows this is exactly what Stephen Curry and the Warriors have done. The Greek Freak was in the league, back when GSW won their first title in 2015. He has seen the rise and fall of this team.

Giannis on ESPN… congratulating the Warriors on their Title, Dynasty and how they set the example.

It is also important to recall that Antetokounmpo has shown lots of respect and admiration towards the Warriors team, especially their leader Stephen Curry.

Giannis had not been paying avid attention to the NBA Finals like the rest of the world. Instead, he chose to spend his free time with his family. However, he went to congratulate the Dubs for winning the finals and beating the Boston Celtics after everything was said and done.

The Greek Freak says it well. Many NBA players can merely dream about winning a single NBA title. However, the Golden State dynasty has won its 4th championship in the last 8 years. This is a fantasy or delusion for some players that will never come true. Giannis knows that this should feel simply unreal. Therefore, he stated that the Warrior’s achievements set an example for the rest of the league to follow.

Khabib’s Prodigy Umar Nurmagomedov Will Be a Huge Threat to UFC Bantamweight Title, Here’s Why