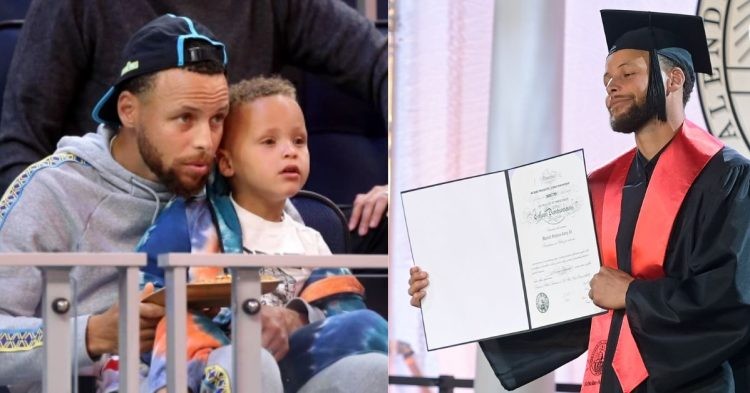 When you think of an NBA player proving his doubters wrong, Stephen Curry would surely be one of the names to pop up in your mind. The American has made a name for himself in the league as the 3-pointer king. He sits at the throne for most 3-pointers scored in NBA history. He overtook Ray Allen last year and has made the record his own.

If that wasn’t enough, Steph now holds the record for most titles among active players (4). He tied with LeBron James after winning the championship once again this year with the Golden State Warriors. Together with a ring, he also brought home his first ever Finals MVP trophy this year, and deservedly so. His heroics in the NBA finals has caused his college, Davidson, to retire his jersey number.

Davidson announced a couple of months ago that they will be retiring his jersey on August 31st. They told the Currys that they would only do so if he graduated with a degree from the college, and did this year. He graduated with a bachelor’s degree in Arts and a major in Sociology.

The Chef entered the NBA Draft a year before he was supposed to graduate. However, things took a turn when the Warriors drafted their best-ever player when he was just 21. Since then, he has been one of the best players in the NBA.

Before Steph received his diploma, he ran into a special someone. It was none other than his son, Canon, who adorably showed his support for his dad. Canon was holding a “Curry for 3” banner as Steph arrived at the scene.

As he saw the banner, Steph shook his son’s hand and kissed him, before kissing his other children and wife, Ayesha. The Warriors posted the wholesome encounter on their Twitter page.

Davidson also inducted the Baby Faced Assassin into their Hall of Fame yesterday. After the ceremony, Steph gave a speech to the crowd that came to support him.

Although it was a small speech, it showed how much the day meant to Steph. He has won it all in the NBA, but what he achieved at Davidson will always be special as it was the place his legacy first started.

Today I got to see Steph Curry graduate from Davidson and yes I cried pic.twitter.com/czt40uFtIi

Since the ceremony, Twitter has been filled with fans who have shown their support for the GSW star. One fan expressed their emotions as she said, “Today I got to see Steph Curry graduate from Davidson and yes I cried”. She also posted a video of Steph making the crowd in attendance sing “Sweet Caroline” during the event.

The greatest MVP award of all

That wasn’t the only fan who reacted to Steph’s latest achievement, or greatest, according to them. The tweet said, “The greatest MVP award”. It was a reply to Stephen Curry arriving and reacting to Canon’s banner. As they said, having your family by your side at your best moments is always one of the best things in life.