Has Mark Cuban Ever Attended a WNBA Game? 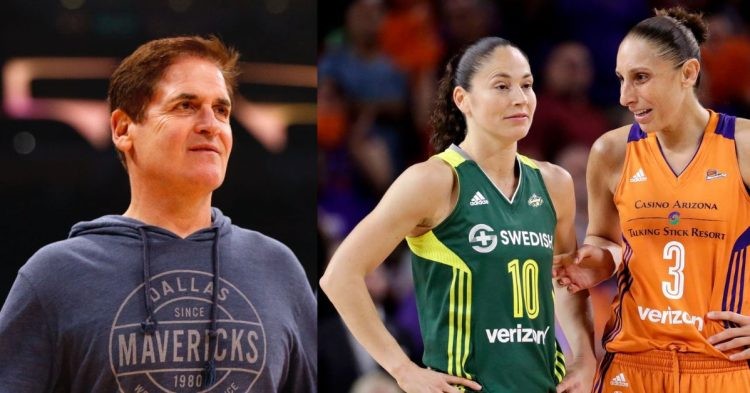 Mark Cuban is a Billionaire businessman and the owner of the Dallas Mavericks. NBA fans will recognize this team to be the home of NBA superstar Luka Doncic. Cuban has always shown a great deal of respect and admiration for Luka and the NBA. However, can the same be said about the WNBA?

As we all know, the WNBA is a professional basketball organization for women that is closely affiliated with the WNBA. Several notable female athletes like Sue Bird, Brittney Griner Skylar Diggins-Smith, and many others have emerged from it. With that being said, we should wonder if Mark Cuban ever cared enough, or felt like attending and watching a WNBA game. Additionally, knowing what he thinks about the organization is also certainly helpful.

While this might seem like an exaggeration, that is exactly what Skylar Diggins Smith feels. To those who might not have heard about her, Skylar is a WNBA star. She spent three years playing for the Dallas Wings. This was in the same city as the Mavericks, a team that Mark Cuban owns and is very proud of.

When discussing the wage gap between NBA and WNBA players, Skylar called out the Mavericks owner and claimed that he has never shown up for a single Dallas Wings game as far back as she can remember, “We’ve had Cowboys and Mavericks show up at games and support us. I haven’t seen Mark Cuban in a game. And I’m sure I wouldn’t miss him.”

It is certainly quite difficult to miss a man as influential and noticeable as Mark Cuban. Therefore, it is fully possible that he has never attended a WNBA game in his life. However, does that mean he cares little about the organization or wants nothing to do with it?

Cuban once mentioned in the past that he was willing to help the WNBA and even sat down with Skylar Diggins Smith for a private interview. There, he explained the intricacies behind the league’s business and made it clear that the wage gap was a matter of revenue, not gender.

“You’ve got to go out there and create new properties. You’re not going to all of a sudden double WNBA interest so that you can get a huge TV contract to save the day. But what you can do, because the WNBA is so much bigger, dramatically bigger, outside the U.S. than it is in the U.S., there’s players that won’t play here because they make more money overseas.”

Perhaps Mark Cuban was indicating that some form of globalization would be required if the WNBA wanted to generate more revenue. Doncic even promoted a Dallas Wings star, Arike Ogunbowale, and made claims that she should become the WNBA Rookie of the Year.

Unfortunately, that only led to more alienation and some made claims Luka was reading off a script. We hope that others are able to show significant interest in the WNBA so that the organization can pay its players better and generate a profit at the same time.

How Much Prize Money Will the Australian Open 2023 Champion Get?