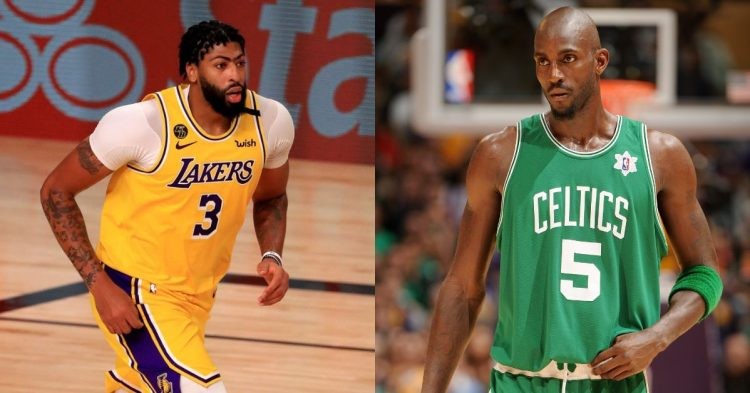 The whole NBA community knows that the LA Lakers are currently struggling. They haven’t even made the playoffs in the last two seasons, even with stars like LeBron James, Anthony Davis and Russell Westbrook. Bron and Davis have faced multiple injuries in recent times, mainly the latter. AD missed a significant number of games due to many injuries that are too many to count.

In June this year, AD revealed that he hadn’t played a basketball for a while. “I haven’t shot a basketball since probably April 5th,” he said. The statement shocked many, as we all thought he will be looking to get back stronger next season. One player that it angered was former Boston Celtics star Kevin Garnett.

During an episode of KG Certified, Garnett expressed his unhappiness. He said, “If I’m talking to AD right now, bro, get lost, go to Hawaii, somewhere, straight up and down. When you come into camp, come into camp in better shape than anybody and everybody. That’s what you should be focused on. You should go for the MVP for the 2022-23 season. All Celtics fans gonna hate me for saying that, but I’m your OG and that’s what I think.”

“That’s my OG advice to AD. It’s his turn to carry the torch. Bron carried that small f**k for a whole decade and then some. AD came to the Lakers to be MVP and to take the torch from Bron,” Garnett added.

Kevin did not stop there. He also claimed, “He can be so much better than what he is. I don’t know what’s around him but I would love to be able to work with somebody like that. I can’t wait to see, I’m actually looking forward to that influence on him because he can be MVP of the league, man! He should be MVP of the league one time.”

Davis joined the Lakers in 2019. Just a year later, he won the NBA title after leading the team with LeBron. As KG mentioned, King James has been carrying the torch for a long time now. And maybe it is about time AD took over.

In the 2021-22 season, AD averaged 23.2 points, 9.9 rebounds and 3.1 assists in just 40 games. The previous season, he played in just 36 games for the Lakers. It is clear that injuries have held him back from performing in recent seasons.

The last time he was consistent was during the 2019-2020 season. However, he has gotten back to the gym recently, to prepare for the upcoming season. AD surely has the ability to win the MVP next season if he manages to stay injury-free.