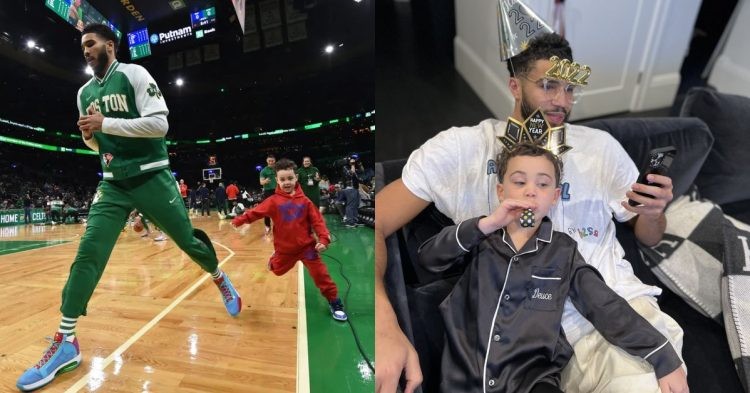 Jayson Tatum is the star of the Boston Celtics. The forward is putting up a wonderful season with the Celtics who are No. 1 in the Eastern Conference. They are 5 wins ahead of their 2nd seed Milwaukee Bucks. Tatum is having a wonderful time on the court as well as off the court with his son Jayson “Deuce” Christopher Tatum Jr.

Jayson welcomed Deuce in 2017, with his then-girlfriend Toriah Lachell. However, the couple is no longer together with each other. Jayson and Toriah actively take part in Deuce’s upbringing. Deuce is 5 years old and is a regular for the Celtics game. Be it a regular season game or the playoffs he is seen beside his father. The two are inseparable and often seen with each other in games.

In the video “In Depth with Graham Bensinger” during a house tour of Tatum’s mother. The father-son pair can be seen in the interview throughout. Deuce even plays one-on-one with Graham and missed the shot, Tatum can be seen telling his son to dribble.

“Deuce is the real superstar in Boston”

Jayson Tatum explains why he writes his son’s nickname on the inside of the tongue of all his sneakers ❤️ (@RUFFLES) pic.twitter.com/mA9pKi8w2e

Deuce, indeed is living in a wonderful place. Jayson talks about how his son doesn’t understand the concept of “Real Life”, and the struggles to get where he is. Deuce is just 5 and he will someday understand it. Jayson wanted a better life for himself and his family, and often bring his son to his games. The Celtics superstar has written his son’s nickname inside all his sneakers.

Tatum was selected 3rd overall in the 2017 NBA Draft by the Boston Celtics. At the time Tatum was dating Toriah Lachell. Jayson first received the news of his girlfriend’s pregnancy when he was 2 months away from the NBA Draft.

In October of 2022 in an interview with New York Post, “I was selfish at first, honestly. I was more worried about getting drafted than I was about being a dad because my whole life I had dreamed about going to the NBA and the best day of my life was two months away. I didn’t tell anybody – I didn’t tell my teammates, the coaches, anything…” said Tatum.

The reason for the two deciding to separate is still unclear, however, the two are actively co-parenting their son. Toriah is reportedly thriving as an entrepreneur with an online business. It is unclear if Lachell is currently dating anyone. However, Tatum has embraced fatherhood wonderfully and looks to do even better on the court this season.