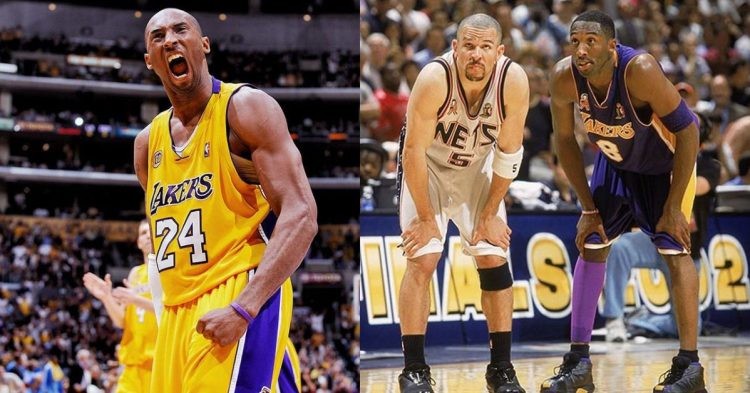 In the NBA, we have many players who have made a lasting impact on the game. Fans will remember players like Michael Jordan, LeBron James, Stephen Curry, Kareem Abdul-Jabbar and many more, for centuries to come. One player that we lost too early and is also part of that club is the late Kobe Bryant. Arguably, there haven’t been many players better than him in the league.

We have seen many players come out and tell the world how Kobe was in the locker room. This time around, former NBA player and current Dallas Mavericks head coach Jason Kidd has made the revelations. During an episode of All The Smoke by Showtime, Kidd made the comments about his old rival.

Kidd said, “We’re playing in the playoffs and I know which way Kobe wants to go. And he gets to go where he went and he jumps and I jump. Unfortunately, his jump is a little higher and longer. I jump like my elevator can only go so high and then it says return.”

“So he hit a game-winner over me in the playoffs, but when you talk about Kobe and his competitiveness, it didn’t matter how big or how small you were. He was gonna try to destroy you. Yes. And that’s what separated him from everyone. He was an assassin. He would cut you and by the end of the game you didn’t know that you were gonna bleed out. That’s just his mentality and he wanted to to win and everything all cost,” he added.

Jason’s comments may not be surprising at all to most of us. Kobe wasn’t just different because of his game on the court. He was who he was mainly because of his undefeated mentality. Kobe always knew he was the best, and that no one can defeat him. His haters may claim that’s overconfidence, but when you trust your abilities like Kobe did, that makes you too dangerous for any other player to stop you on the court.

When Kobe defeated his opponents, he made sure they knew how. As Kidd mentioned, the former LA Lakers superstar hit a game-winner against him, it speaks at length about the latter’s character. He wanted to completely destroy Kidd’s confidence on the court, and the hope he had to stop Kobe. It just shows that basketball is a mental warfare at times and Kobe Bryant was the master of that.
Tags: Jason KiddKobe Bryant
Previous Post