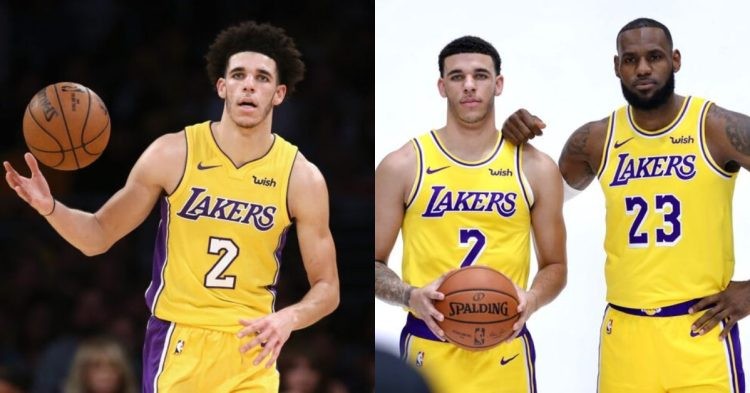 We all know LeBron James is NBA royalty. Apart from the great Michael Jordan, there isn’t any other player to come close to the LA Lakers superstar’s legacy. At 37 years old, Bron is still one of the best players in the league, and the best on his team. Last season, he averaged 30.3 points, 8.2 rebounds and 6.2 assists but failed to help the franchise make the playoffs.

King James has won four titles in his career, with the Cleveland Cavaliers, Miami Heat and the Lakers in 2020. His playstyle, winner mentality and clutch moments has made him a favorite among many, NBA players included. One player who has been vocal about his support for LeBron is former Laker Lonzo Ball.

The LA-based franchise drafted Lonzo at #2 overall in the 2017 NBA Draft. That was a year before the King joined the team. He played on the team without LeBron for one season.

In his rookie season, Ball averaged 10.2 points, 7.2 assists and 6.9 rebounds. They may not be exceptional but the numbers are still quite decent for a rookie who is adapting to the league. However, the worst part was that he missed several games due to a shoulder injury in his rookie season.

It was the 2018-19 season when Bron joined the team. The trade none of us expected but it happened. That was also Lonzo’s last season with the team. Despite only sharing the locker room with LeBron for a season, it seems like the legend had a huge impact on the young player.

Lonzo said, “He was my favorite player growing up. Being able to share the court with him and learn from him was a time of my life I’ll never get back, I’ll never take for granted.”

This wasn’t the only time Ball gave the credit to LeBron for his advice. Last year, the former Laker revealed when did an episode with Uninterrupted for Who’s Interviewing Who. Ball mentioned that he got the best advice in the NBA from James.

Always appreciate the wise words from my guy @kingjames 💯🤞🏽

Lonzo said, “He told me just ‘Keep the main thing the main thing’ and that’s probably stuck with me the most out of anything anyone’s ever told me just because he’s right. Once you take care of what you got to take care of on the court, everything else falls in place.” Ball also added, “I think that’s the best advice I’ve gotten so far.”

Ball did not have a good time in LA due to unexpected injuries. The franchise eventually traded him to the New Orleans Pelicans in a deal which saw them get Anthony Davis in return. Lonzo currently plays for the Chicago Bulls, hoping to win his first NBA championship.