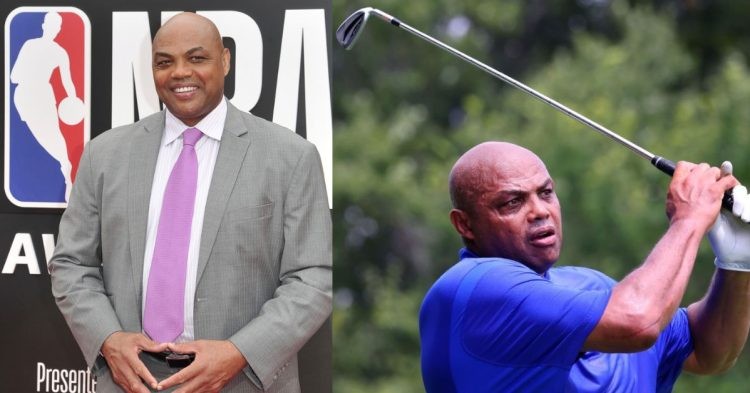 Many former NBA players have taken huge steps in the media industry after retiring. They have played a pivotal role in bringing more audiences to the sport. The most popular example would be Charles Barkley. The American was playing for the Houston Rockets in 2000, before retiring abruptly. He tore his quadriceps tendon and had to end his career earlier than planned.

After retiring as a player at 37 years old, he joined TNT after retiring and quickly became a fan favorite for his bold statements. Along with Shaquille O’Neal, Kenny Smith, and Ernie Johnson, Barkley has run the “Inside The NBA” program successfully. Charles has been part of the iconic show for 22 years.

The former NBA player has been one of the main selling points for TNT to promote the show. However, it seems like the long-standing partnership is about to end. Reports say that Barkley could join LIV golf and leave the NBA.

Chuck signed a deal with TNT that ends around the same time as the 2024-25 NBA season. Earlier this year, he revealed his retirement plans after having an illustrious career in front of the TV. He mentioned that he will only feature for TNT for 2 more years, meaning he will finish his contract with them.

At the end of the call, Barkley was asked how much longer he’ll continue to be a broadcaster. Barkley, 59, says he has 2 years left on his contract “and that’s probably going to be it for me.” ….

However, the plans seem to have changed after rumors of Barkley joining LIV Golf emerged. From LIV’s perspective, the deal could do wonders. We can’t deny that Barkley is the most popular sports TV personality in the USA. If they land Barkley, their revenues could skyrocket and it could help their brand image to improve as well.

Although we do not know the exact amount TNT pays Charles, he once revealed that $20m a year wasn’t too much. He was asked if LIV triple that amount and if that would be enough to take him away from the NBA.

During the Dan Patrick Show, he said, “if they triple it, the next time I’m on your show, the first question about to be Charles what we celebrating at tonight, that should be your first question if they triple what I’m making now”. LIV has the financial backing of the Saudi Arabian government after they reportedly invested a staggering $2 billion. It’s only fair that Barkley expects a hefty offer for him to join them.

Charles Barkley discusses what type of offer it would take for the #LIV Tour to get him. pic.twitter.com/RGyj4igK22

Many might hate on the four-time Emmy winner for prioritizing money maximization. If we’re being honest, all of us would take that offer as well. Charles has even hit back at his critics and admitted, “I’m not gonna get on here and say it’s not about the money. Of course, it’s about the money, I think a bunch of LIV guys, they’re so terrified to say ‘it’s about the money’, everybody’s taking the job for money.”

-Charles Barkley says he has not received an offer from the #LIV Tour yet pic.twitter.com/mUHHQExEZn

The former Philadelphia 76ers star hasn’t signed a deal with LIV and CEO Greg Norman. He said, “they haven’t offered me a contract. They asked if I was interested, I said yes, I met with Greg and told him yes, and I have not heard, he asked me to play in the pro-am and I’m playing in the pro-am. But I’m not gonna keep TNT in limbo, that’s not fair to them.”

“They haven’t offered me a contract. They asked if I was interested, I said yes…My sponsors are concerned. I’ve heard from Subway, Capital One, Dick’s Sporting Goods, so at some point I’m gonna have to make a decision.” pic.twitter.com/a8odkmfOJt

We know how big of a deal Chuck is for TNT. If they let him work for them and LIV simultaneously, that wouldn’t be a bad idea at all. The two sports broadcasters are not competitors that operate in the same sport. Adding on, Charles Barkley is one huge factor in why fans tune in to hear his bold and fearless statements. If they choose to let Chuck go, the viewer count would definitely reduce.