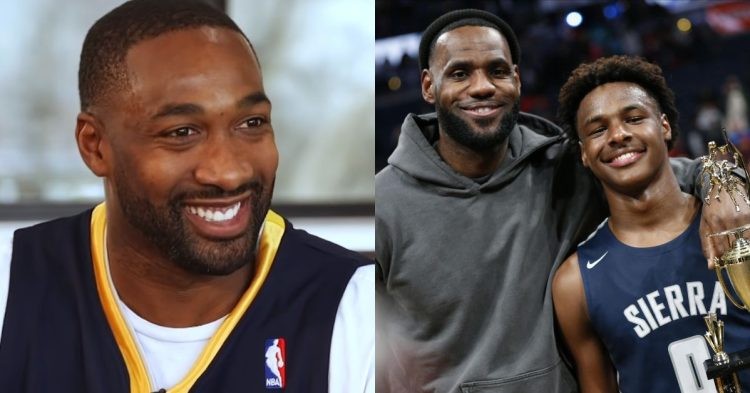 Bronny James, the eldest son of Los Angeles Lakers star LeBron James, is now a senior in high school. These are crucial times for the 18-year-old as he gets ready to enter the next phase of his career – college basketball. Bronny, one of the youngest millionaires among student-athletes, is reportedly seriously considering three offers, all from Nike schools. Not surprising, as we already know LeBron is a Nike athlete.

However, Bronny might be more than just his father’s shadow. While the hype around Bronny isn’t nearly as much as it was during LeBron’s pre-NBA days, he is still making waves. The 6-foot-2 guard has received high praise from current and former NBA athletes.  One of those athletes is none other than ‘Agent Zero’, Gilbert Arenas himself.

Bronny James goes between the legs eastbay like his father LeBron 20 years ago 👨‍👦 pic.twitter.com/FUNLA3xjDq

The three-time All-Star got a chance to observe Bronny in 2017 when King James asked him to train his son. Arenas trained with Bronny for a few weeks and even made a checklist of similarities between Bronny and LeBron. At the end of their training time together, Arenas only had these words for LeBron, “Don’t even worry. He’s you.”

What did Gilbert Arenas say about Bronny James?

“I’m watching him, looking at him,” Arenas said in an appearance on The Complex Sports Podcast. “I text [LeBron] back, and I said, ‘Don’t even worry. He’s you.’ I said, ‘From what I can tell right now, he probably has a better shot than you did, dribbles better than you, you guys probably have the same passing ability, you were probably faster, taller, he probably jumped higher.”

LeBron asked Gilbert Arenas for his honest opinion of Bronny.

During their time together, Arenas also once put Bronny to the test by pairing him up with the more experienced Scottie Clark. As was to be expected, Clark was giving Bronny the business on the court. Arenas gave Bronny his energy with just six words at that point. “Bronny, you’re just going to take that?” he asked. “No!”, Bronny retorted.

After that, according to Arenas, something clicked inside Bronny. He went on to beat Clark 5-0. “Them Genetics just kicked in.”, Arenas recalled uttering to himself at that moment. The former Washington Wizards point guard also stated that Bronny would become a “whole different beast” once he gains some height. Bronny currently stands at 6-foot-2.

LeBron’s reaction to all this information was that of a relieved father. “Yo, dead on!”, he exclaimed. Ever since Bronny started playing basketball, he has been under constant public exposure. And with that exposure comes constant scrutiny. But Bronny has an all-time great player in his father to guide him through. Further, if Arenas is to be believed, Bronny might turn out to have a career close to, if not just like his father.