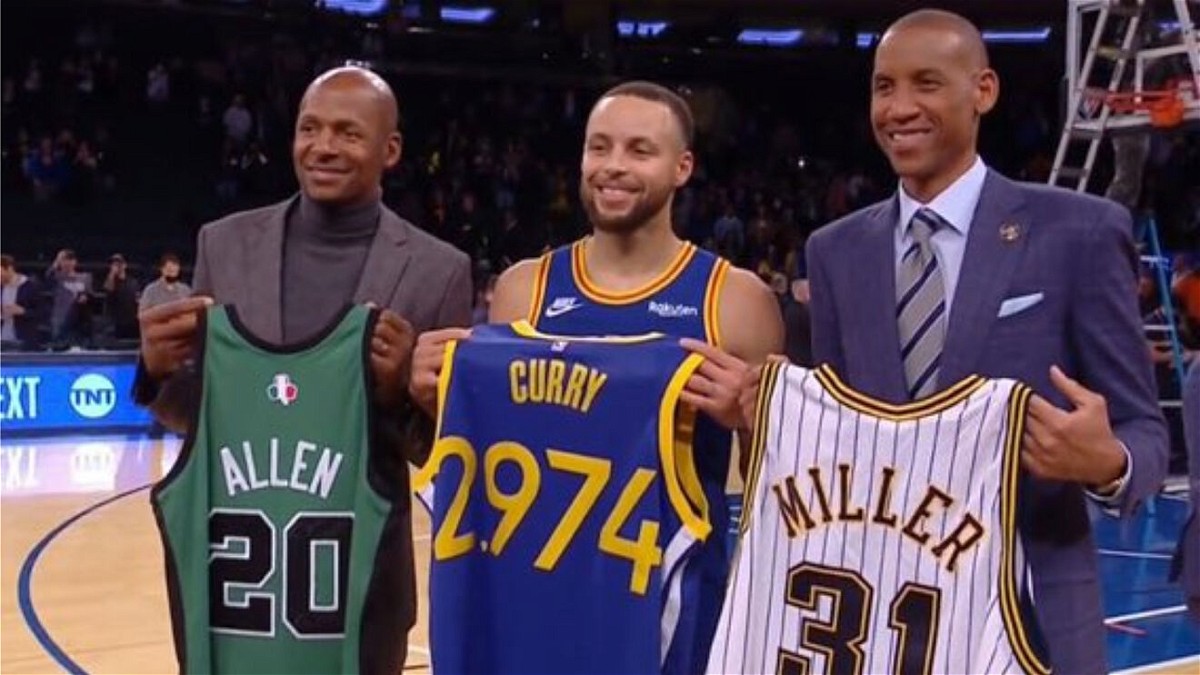 Stephen Curry holds the record for most 3 pointers made in the NBA regular season. The moment took longer time than expected but when it finally arrived, man, it was worth a wait. Steph finally made the three that possibly would be the most valued one in NBA history. Just after that 3-pointer the Warriors quickly fouled and called a time-out. The intention was clear, that Curry could enjoy the moment and everyone would get a chance to congratulate him.

The record-breaking shot was in the first quarter, just after 4 Mins, 27 seconds play into the game. Andrew Wiggins was the assist maker, as Steph scored a 28-footer from the right-wing. The timeout was for a longer period than usual, as to cherish the historic and iconic moment in the NBA. The Garden was at full capacity and everyone gave a standing ovation to the record holder.

“I got that baby!” Curry said.

Stephen Curry was heaped with praises after breaking the record

Even before the game has started, two of the great 3 point shooters – Reggie Miller (3rd in the list), Ray Allen (now 2nd in the list) gave a huge hug. It really was a great gesture and moment in the NBA. Former record holder Ray Allen specially flew down to NY for the possible record-setting game, while Miller was on the court, covering the game for TNT.

With this, there were several tweets and messages congratulating Steph on the achievement. It is not possible to mention all of them, so let’s go through a few of the notable players’ wishes.

LeBron James, one of the active NBA megastars didn’t waste time to congratulate “his brother” Steph. He twitted,

LeBron and Steph had a series of on-court rivalry matches but also have huge respect for each other. They had iconic NBA finals run against each other for 4 consecutive seasons between 2015 and 2018, where Steph won 3 championships (2015, 2017, 2018).

LeBrons’ closest friend and Steph’s supposed arch-rival Chris Paul was not left behind in appreciating Curry on the achievement. CP3 tweeted,

CP3 widely considered as the current “Point God” by many has history against Steph. But here again, Curry bests Chris Paul 26-18 over the total matches played.

Another great one to congratulate Curry was, Magic Johnson. 4 times NBA Champion, Johnson had great 13 seasons with the Lakers, and arguably the greatest point guard in NBA history. His plays and magical passes earned the name “Showtime Lakers” to the team. His tweet was,

Congratulations to Steph Curry for making history and setting the new NBA All-Time 3-point record tonight!! Thank you @StephenCurry30 for revolutionizing the game of basketball forever! ???????? It was great to see his parents Dell and Sonya there supporting him!

The 24-year-old Nuggets guard is still out of action, recovering from a torn left ACL, suffered during the 2020-21 season. His return is still questionable.

Also Read: NBA Comparisons: Who Is the Better 3-point Shooter Between Stephen Curry and Ray Allen ?

Jake Paul vs Tyron Woodley Rematch: Date and Start Time in 10 Different Countries and Where to Watch