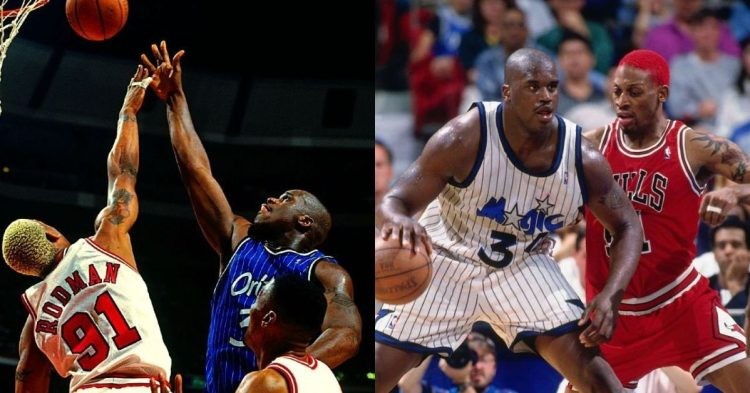 The NBA has been lucky enough to witness many tall players over the years. But being tall does not necessarily mean that a player is dominant. Strength also plays a significant role in making a player dominate. When we think of the word, Shaquille O’Neal will surely be one of the first names to pop up in our minds. The former Los Angeles Lakers star was undoubtedly one of the most dominant players to ever grace the game.

Shaq is 7 feet 1 in tall, which is the perfect height for a center. With that, Shaquille also boasted a ridiculous amount of muscle and strength. All that combined, he became an unstoppable force that no one could stop. One of the reasons why Shaquille was always rated was because of how he took the league by storm even when there was so much of competition.

For instance, when he was a young player, Patrick Ewing, Hakeem Olajuwon, Tim Duncan, and many more similar players were in the league. He cemented his place as a world-class player even when the NBA world had these greats present at the time.

We all would have thought that no player was able to stop the big man. Shaq was so dominant that the NBA had to even change the rules about dunking for him. However, a certain legend who goes by the name of Dennis Rodman did lock down Shaquille O’Neal.

In 1996, the Lakers played against the Chicago Bulls. The Bulls boasted a legendary roster with the trio of Michael Jordan, Scottie Pippen, and Dennis Rodman. Shaq has played against Rodman on many occasions during his career and the former has always done a tremendous job of defending the big man. However, on 17th December 1996, it was a completely different story.

Shaq did score points that night, but none of them came when Dennis was defending him. In the first half of the game, Shaq was up against other Bulls defenders. But when he faced Rodman after halftime, he did not score any points against Chicago’s no.91. O’Neal was also on 0/3 FG when he played against Rodman that night.

There was only one person I’ve ever seen consistently defend Shaq well and that was Dennis Rodman. The man had ridiculous stamina and strength. Probably did it after a night of hookers and blow too lol

That performance from Dennis Rodman went down as one of the best in his NBA career. In addition to that, he also became the only player who could defend the “unstoppable” Shaquille O’Neal. A fan once wrote, “There was only one person I’ve ever seen consistently defend Shaq well and that was Dennis Rodman. The man had ridiculous stamina and strength.”

Another also applauded “The Worm” for his defensive skills. They tweeted, “I’ve [seen] Dennis Rodman more than adequately defend Shaq in my lifetime on multiple occasions.” If this wasn’t enough, a user has also claimed that Rodman is what fans perceive the great LeBron James to be.

Dennis Rodman was what y’all claim Lebron is on the defensive end. Rodman is the most versatile defender of all time. Guarded MJ and Orlando Shaq better than anyone. Rodman could truly defend all 5 positions. I’d like to see Lebron attempt to stop Shaq in the paint 😂😂 #NBA

It’s quite evident that fans recognize Dennis Rodman’s defensive ability. Many have tried to figure out how he managed to stop a giant Shaquille O’Neal. The answer to that would be his resilience and concentration. Every time Dennis was up against Shaq, he always made sure to be physical with him and never back down from a fight, which has led to many fights between the pair as well.