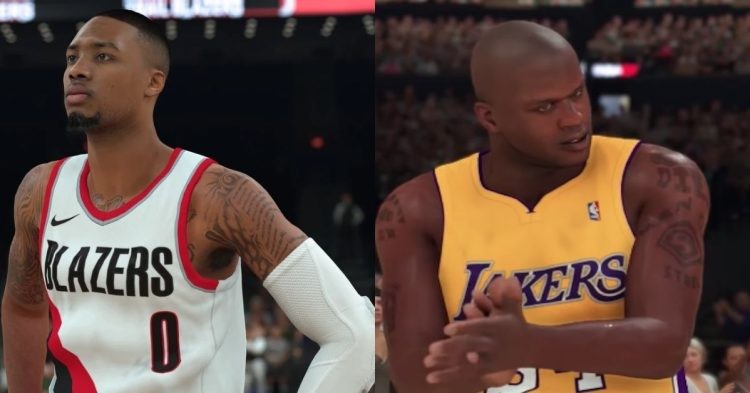 The game is most known for its individual player ratings. The ratings are decided based on various factors that are worth looking into and understanding. It is amusing to note that NBA athletes in the league are quite sensitive and care about their ratings.

Here’s how the overall ratings are decided in NBA 2k

The OVR of NBA players changes every year. 2K game makers attempt to bring analytics and statistics into deciding the ratings as opposed to going with fan-favorite moves or decisions based on the player’s popularity. The overall rating can be broken down into small individual rating systems.

This allows an average to be created which would become the player’s overall rating. There are several attributes of basketball play that are taken into consideration when creating individual rating systems. Examples of these could be passing accuracy, shot contesting, free throw percentage, and much more

Reports suggest that the analysts use more than 50 variables such as these in order to definitely calculate a new rating for the player. Moreover, their performance the previous season also plays a significant role in changing the ratings.

Put in simple words, if a player shines and dominates his rating increases. Making mistakes and playing bad leads to the lowering of ratings. For example, Russel Westbrook has struggled shooting the ball this season. Moreover, he has averaged a lot of turnovers this season. Therefore, it would be no surprise to see his overall rating dip below normal next year.

The player with the highest rating ever

It is difficult to guess who was given the highest ratings. After all, there are several greats in the NBA. It could be Michael Jordan or LeBron James or any NBA great of the past. However, it would surprise a few people to know that Shaq has the highest rating ever.

He’s the only player in 2K history to be a 100 overall pic.twitter.com/AiDWARM6uh

Shaq was given a perfect 100 OVR in the 2002 NBA 2K edition. No other player has come close to this. The reasoning is that O’Neal’s dominance was so great that his flaws could be ignored in that season. This urged the game makers to give him a perfect rating. Not even LeBron James has gone past a 99 OVR.

It is important to note why Shaq was given a perfect rating. In 2001, he was coming off a three-peat of NBA championships with the LA Lakers and Kobe Bryant. That is why the game makers decided to reward him with a 100 overall rating.