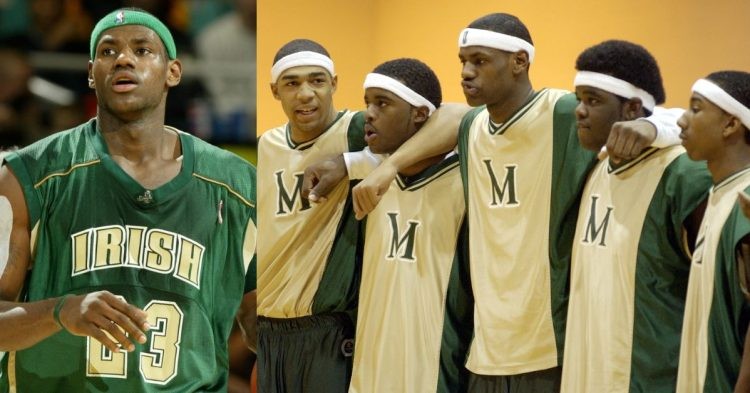 In the USA, high-school basketball is one of the most competitive. Each school fights every year to take home the championship against its bitter rivals. In such a country, LeBron James’ St. Vincent-St. Mary High School is a household name.

The Akron-based school once won three championships in four years, with the help of their Fab 5. The team consisted of young talents from all over the place and also included LeBron. The King has been the greatest player the NBA has ever seen. We know how his career turned out ever since the Cavaliers drafted him, but what about the Lakers star’s teammates?

Although none of the four members made it to the league like Bron, they did have careers to be proud of. Let’s have a look at how the other four players did in their respective careers.

The most popular member of the four would probably be Dru Joyce III. It’s not every day you see someone with a stronger mentality than their father. Little Dru, as LeBron calls him, had an elite mindset and was the first member of the Dream Team that his father, Dru Joyce II created. He became a part of the team even before LeBron.

After putting in a shift at point guard for his high school, Joyce went to college at the University of Akron. He didn’t even lose his touch there. Dru became a legend at the school after he set the record for highest assists of all time.

After college, Little Dru decided to enter the 2007 NBA Draft, 4 years after his teammate LeBron. However, he went undrafted that year and decided to play in Germany. After playing for various teams in Europe, Dru took up a coaching role at Cleveland State University.

Dru was asked if he ever imagined becoming a coach and following in his dad’s footsteps. He answered, “I did, I feel like my dad was grooming me for this almost you know he’s always preached being a leader as a point guard, being the floor general and understanding how to run the team and knowing which buttons to push so he rubbed off on me in a big way.”

Romeo Travis was also one of the Fab Five. Just like Dru, Romeo did his degree at the University of Akron, before going abroad to play basketball. At college, he became the leader in most blocked shots of all time (161). There is one huge difference between his career and Dru’s. The point guard played in just one country, but Romeo ended up balling out in different countries. Ukraine, Italy, Israel, Germany, and Spain to name a few.

After retiring, Travis worked with his former teammate Dru to establish the Give’N Go Basketball Camps. The purpose of the Akron-based camps is to contribute to the community.

Along with the other three players, William McGee was also an integral part of the team. He was as important as the rest of them as the team won three championships together. Although it is unknown whether McGee attended college like his old teammates, he definitely got his career to be successful.

The American enjoyed a coaching stint at Akron East, a high school run by the government. Moreover, he was also an athletic director for his high school. Earlier this year, he stepped down from that role to be a part of the LeBron James Family Foundation.

Sian Cotton played at center for St. Vincent-St. Mary. At first, he was not familiar with basketball and had to learn step by step. However, the Ohio State University acquired his football services. Sian decided rap music was the career choice he was going to make after realizing football wasn’t for him.

You probably know that one of Sian’s songs made it onto NBA 2K14 as one of the tracks. Moreover, if that wasn’t interesting enough, Cotton even made a song with the former Miami Heat star himself in 2015.
Tags: LeBron JamesNBA
Previous Post