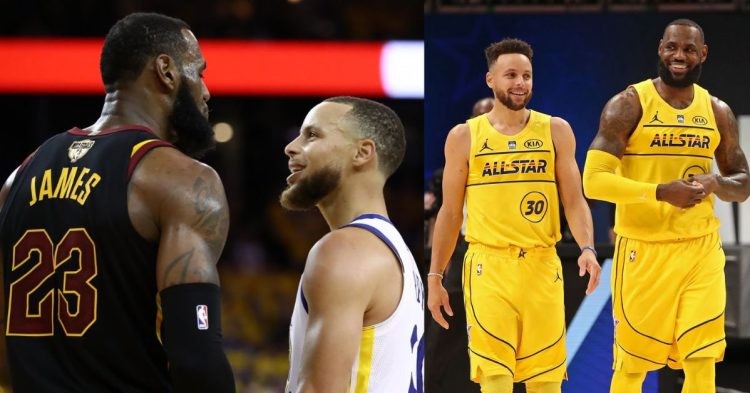 Stephen Curry has been one of the greatest players each year since joining the Golden State Warriors. They drafted at 7th in the 2009 NBA Draft. Steph has helped the Warriors build a dynasty where they have come out on top. He has been instrumental in the team’s recent successes.

👀 the BEST PLAYS from @StephenCurry30 this season! #TeamDay | @warriors pic.twitter.com/qz2En0Vprf

One of them includes the 73-9 record that they had in the 2015-16 season. Despite this, they lost in the finals that year, to none other than LeBron James’ Cavaliers. That was the time when LeBron helped his team make the comeback from a 3-1 deficit.

Be that as it may, that doesn’t make Steph any less of a legend. Putting aside his titles and achievements, he has played a pivotal role in changing the game. We all know players are now more technical in terms of shooting abilities. There wasn’t anyone who could shoot like Steph until he joined the league. To truly cement his status as a great, he even took the throne from Ray Allen for most three-pointers made in NBA history.

In an interview, LeBron revealed how great Steph was. He answered, “I think a lot of people don’t understand how great his motor is. He never stops moving. His ballhandling, his ability to shoot the ball off the dribble and off the catch. It’s uncanny.” How King James describes The Chef tells us all we need to know. Steph seems to surprise even the greatest players with his game.

“I don’t think there’s ever been a guy in the league to shoot the ball the way he does off the dribble or off the catch, off the ball. He just creates so many matchup problems for your defense, and you just always have to be aware”, James also mentioned. Despite having the edge over Curry’s Warriors many times, LeBron knows the brilliance when he sees it.

In the end, the interviewer asked LeBron how to stop the Warriors superstar. James’ was iconic as usual. He said, “Same way you slow me down. You can’t.”. We can all agree with the Lakers man when he says these two players have caused so much trouble for opposition defenses.

That wasn’t the only time he recognized Steph’s ability. During the 2021 NBA All-Star weekend, the 37-year-old spoke about Curry again. He said, “He literally has the automatic sniper connected to his arm…Nine times out of ten, sometimes ten times out of ten, it does go in. To be out there and watch that kid from Akron as well, shoot the ball the way he shot it, it was unbelievable.”

As James said, Steph does have the automatic sniper on his arms. We expect his shots to go in even when his release or setup isn’t perfect. Adding on, the fans are even surprised when the Baby Faced Assassin misses a single shot. That’s how much we are used to seeing Steph making every single shot.