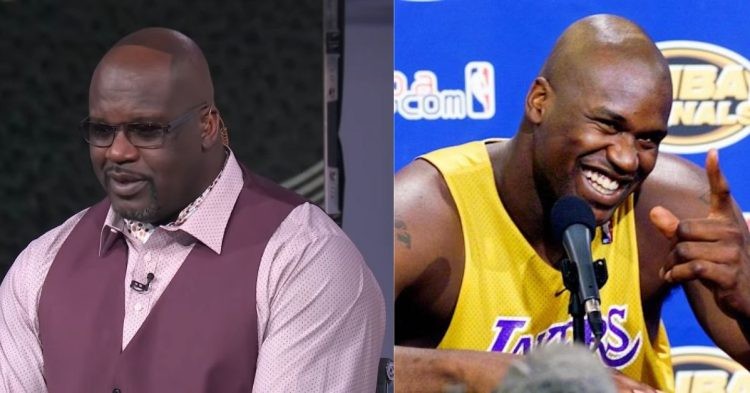 Shaquille O'Neal with the Los Angeles Lakers and on Inside the NBA (Credit: Twitter)

Does Shaquille O’Neal even have hair on his head? A few years ago, Dwayne Wade had a bet with the former NBA superstar on whether the Miami Heat or Milwaukee Bucks were going to win a match. Shaq sided with Giannis Antetokounmpo and the Bucks, predicting a blowout win. To his dismay, Jimmy Butler and the Miami Heat ended up winning that game.


As a result of losing this bet, O’Neal decided to accept D-Wade’s punishment. It simply revolved around letting his hair grows as much as possible. In contrast to keeping it shaved like Shaq always does. The end result was quite amusingly disturbing and begs the question. When exactly did he lose his hair and how does that look? Therefore we need to take an in-depth look at this situation.

It would appear as if most if not all NBA legends suffer from a case of receding hairline and eventual baldness. From LeBron James to Kobe Bryant to Michael Jordan to Kareem Abdul Jabbar, the list never really ends and baldness seems to be a recurrent theme.

Even so, there is no denying that Shaq has been bald for as long as we can remember. Therefore, we had to go into the archives of the internet in order to understand his transformation over the years. By doing so, we will be able to form a clear picture of what happened.

As we can tell, Shaquille O’Neal definitely had hair as a child and into his school years. It looks to be quite short and close to his scalp. O’Neal soon entered the spotlight as a phenomenal basketball talent during his high school days. NBA fans will remember that Shaq studied at Cole Highschool in San Antonio. There, he still had his hair and even shaved the sides of it in order to increase the prominence of the rest of his hair.

Now is where things get interesting. From what we can tell, Shaq soon completely shaved his head and went completely bald as his professional career in the NBA began with the Orlando Magic. He remained so throughout his career with several other teams like the Los Angeles Lakers, Miami Heat, and Boston Celtics. We presume that his hair fall got to an extreme level. Thus, he simply decided to shave it all off and remained that way.