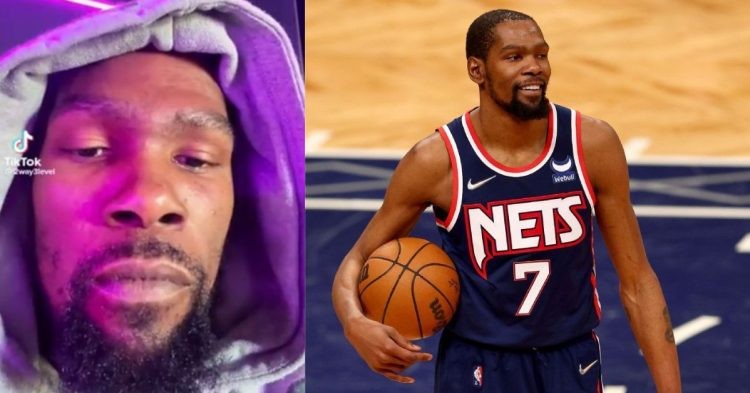 Kevin Durant has been in the limelight for a while now. Earlier, he made the headlines after requesting a trade. His motive for not wanting to play for the Brooklyn Nets anymore was clear. After KD requested a trade, there have been many reports emerging of Kyrie Irving also wanting out.

The Lakers seem to be running at first place to land Kyrie, and there haven’t been important developments in Durant’s case. Popular TV personality Kendrick Perkins has even called the Nets star’s trade request a “scare tactic” to help Kyrie.

Don’t know if he understands the app just yet.
pic.twitter.com/63yVJ2HnyZ

Durant has got the attention on him again. Earlier today, he created a TikTok account and what he said made many laugh. Usually, when a celebrity creates a new account and does their first video, they’ll introduce themselves and announce that they have a new account to post content to. KD being the hilarious personality he is, said, “Yo, how I work this sh*t”.

Durant is one of the biggest NBA stars on the planet. Just as we expected many fans on Twitter quickly responded to KD’s video. One fan even tweeted that they could relate to Durant.

It seems like Durant is going through the internet’s complicity like the rest of us. Many things have changed over the years. Keeping up with the technology-dominated era has been hard for almost all of us, and we can’t blame Durant for the same.

Moreover, it seems like the American’s trade request is still on fans’ minds. One fan even said, “KD is about to talk about why he requested a trade on TikTok”

Understandably, the reason for his decision has been unclear. No one really knows why KD wants to leave Brooklyn. Although there have been many speculations about why Durant went ahead with the decision, there has been no information from the man himself.

One fan even started throwing shade at Kevin Durant. He mentioned, “When nothing goes his way, he will bail on TikTok and go to the next social media platform”.

When nothing goes his way, he will bail on TikTok and go to the next social media platform @KDTrey5 https://t.co/c1p0pV83uC

The tweet is mainly about how KD has been claimed to move from one team to another when things don’t work out. This has been happening for ages when he was with the Oklahoma City Thunder, the Golden State Warriors, and now.

It is not uncommon for Durant to receive hate. He is the second-most-hated player in the NBA. But why is KD hated so much? Although he doesn’t deserve one bit of it, it is something expected when you play on one of the biggest stages in the world.