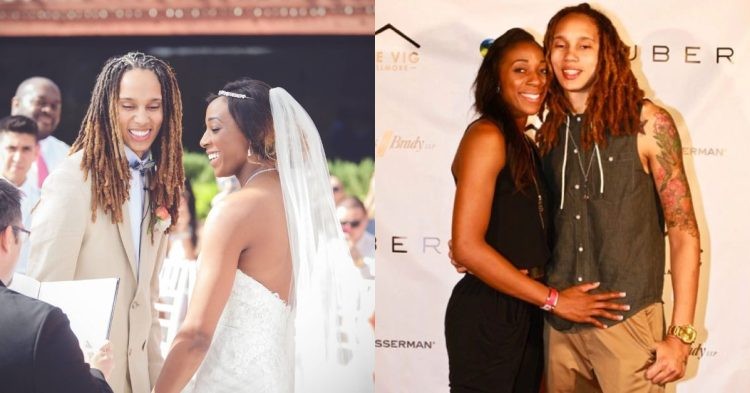 Brittney Griner is now one of the most famous celebrities in the basketball world. Her detainment and release from Russia have been the starting point for numerous conversations in the last month or so. Amid all this, fans have dug up her past to invalidate her release from the European country. One of the controversies she was involved in was her domestic violence case with her ex-wife Glory Johnson.

Brittney is a homosexual female and she has been vocal about her sexual identity for a while now. Despite facing various hurdles growing up, for her voice, from her classmates, and even from her dad, Griner has been always mentally strong and made sure she achieved her goal of playing in the WNBA. Speaking of the game, that’s how the pair met back in 2013.

Brittney saw Glory for the first time at a basketball camp that year, and it certainly looked like there was a spark that Brittney was attracted to. If we fast forward to the next year, Griner ended up proposing to her girlfriend at a party. That was the start of their marriage life.

Do Brittney Griner and Glory Johnson have kids?

Glory filed for an annulment just after a month of marriage to Brittney. It was certainly not the life that she was expecting. The couple was arrested on charges including domestic violence after their daily verbal arguments turned physical. However, neither of them pressed charges back then. Her decision to file for an annulment came right after she announced that she was pregnant.

Glory has welcomed two kids, Ava and Solei. In 2015, she announced the birth of the twins on Instagram. Many believed that Brittney had a role to play in Glory’s pregnancy. But the truth, according to Brittney, is that she was not biologically connected to the children. The world later found out that Glory got pregnant through the “Vitro Fertilization” process at a fertility clinic.

Despite not being related to Ava and Solei, Brittney was still ordered to pay child support, and a huge chunk of the childcare costs as well. Although rumors of Glory’s cheating scandal floated around for a while, the truth is that she was not connected to Glory’s children in any way.

Who is Brittney Griner married to?

Brittney had a turbulent relationship with Glory that ended on a bad note. The world is aware that Brittney completed her college education at Baylor University, the institution which she led to a championship too. That was where Griner met Cherelle Watson. Although she had a relationship and a brief marriage in the middle, the pair found their way to each other.

It is not known when they started dating exactly, but the pair got engaged in August 2018. Just a year later, they tied the knot in June 2019. That was where Brittney’s beautiful family life began, although she doesn’t have kids with Cherelle Griner until now.

Cherelle, now a lawyer, was vocal about her struggles when the WNBA star was in prison. She has often mentioned that she felt helpless, indicating that she did not know how Brittney was doing at all. Now, the couple has been enjoying their private time, away from the media, amid reports of Brittney’s return to the WNBA.

As for Glory Johnson, she claimed that she wanted to refrain from commenting on Brittney’s situation, but pointed out that the Phoenix Mercury center was misunderstood by many. Whatever the case, there is a strong possibility that the pair might have come into contact once again after Griner’s most-awaited release from Russia.