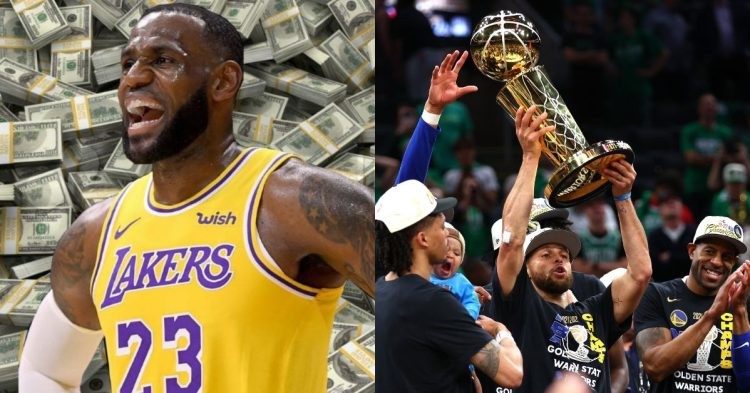 How does that saying go? ‘The best things in life aren’t free’. That might not be the saying but it should be. Sports and money are essentially interlinked with one another. For a sport to thrive they need a lot of capital to be put into it. The NBA has that aspect into their collective bargaining agreement and here is what luxury tax means.

The NBA has tried its best to create parity and competition in any way it can. Constant rule changes and a creating bigger market is the way they have been implementing this. It has made some changes but it’s not the complete solution to the problem. And until that is found, there will always be a slow rise or fall in the NBA’s attempt to create a fair league.

How is the Luxury Tax calculated?

The NBA luxury tax was more of a broad concept rather than a strict rule. It was a league-wide tax and was only imposed on seasons where ‘league-wide’ salary crossed 61% of the total basketball-related income. This rule helped teams that spent a lot of money at the time face no consequences because the net spending was never over the threshold.

Due to complications in understanding the rule the NBA had to evolve it. The 2005 CBA cleared it out and helped teams understand what their spending limit is. Once a team spends above that, they need to pay a price for it. There is a limit to that as well known as the soft cap and the hard cap.

The soft cap allows a team to spend over the pre-established cap and need to pay a luxury tax for every dollar they spend. Hard salary caps forbid teams from going above the salary cap. There isn’t a very easy way to make people understand how the calculation of the tax works but if one was curious, they could calculate it on an NBA luxury tax calculator.

Super teams are teams that have multiple all-star or superstar players on the roster. This gives the team an unfair competitive advantage which could render the season pointless. However, some people enjoy seeing their team or favorite stars get some help. But the consensus has always been that super teams have destroyed the league.

If you go through the list of teams that have paid the luxury tax the most in the past decade and a pattern starts to form. The Golden State Warriors are on the top of the list with $337,841,573 and have paid it 5 times. They were the last dynasty in the NBA and the most synonyms with the concept of ‘super team’. At one point, they had 5 former all-stars on the roster at the same time.

The 2nd team on that list is the Brooklyn Nets who showcased to the world what are the cons of having a super team, twice. Once with the Kevin Durant era and the other was the Kevin Garnett era. In the top 10, there are also teams like the Lakers, Cavs, and even the Clippers proving that it costs a lot to have a super team.

There are currently 11 teams over the NBA’s luxury tax line (listed by amount over the tax line):

The understanding that has been established is that teams are willing to pay a lot of money in luxury tax to be relevant and contenders. They will make the money back with ticket sales, jersey sales, brand deals, sponsorships, and even by just winning the NBA title. There is a lot more parity in the NBA currently than it was before. But it’s not because of the luxury tax rule.

The NBA needs to look at the problem as a bigger picture. And attempt to fix the problem before the league falls back into a similar situation.

The future of the NBA and its financial rules

Due to Covid, money everywhere became a problem. That affected the NBA as well as they lost money on ticket sales and broadcasting. In comparison to that, the income currently has spiked astronomically. Some of the greatest players are headlining the league and fans want to be at games as much as possible.

That has helped the NBA increase the cap. They have estimated an increase in the 2022-23 salary cap to go up to $122 million and the luxury tax to $149 million. This is not an astronomical change but just means that some teams will be paying slightly fewer taxes next season.

This rule has come into play due to better content from the NBA. But this has only helped teams that are in the territory of the ‘super teams’ category by taking economic pressure off of them. Names like Kevin Durant and Kyrie Irving are on the trade block with their huge contracts. Teams like the Lakers and Warriors are front runners to get one of these stars which will revive the super team era. Hence, it’s the best example of how the luxury tax rule does not curb the problems of super teams at all.