How Many Teams Did Shaquille O’Neal Play for in His NBA Career? 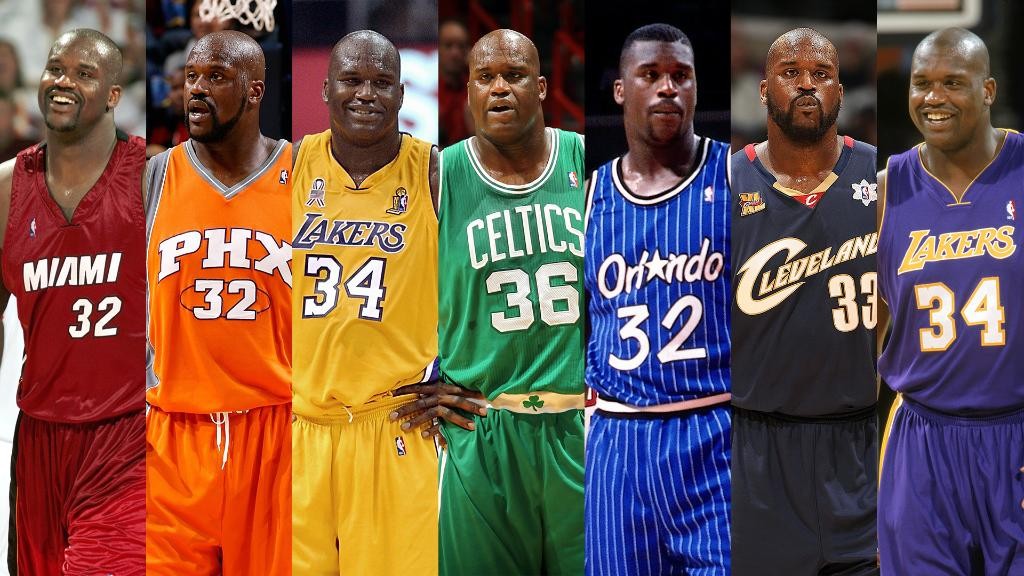 Shaquille O’Neal has had a career that has spanned 19 years and 1207 games. His career propelled him to be one of the most recognizable faces in the NBA. While his 7 feet 1 inch and 325-pound frame remained constant for most of his career, the colors he wore changed a good number of times.

O’Neal played for 6 teams in total in his career. But the most prominent memory of Shaq has to be his time at the Los Angeles Lakers and Orlando Magic.

Drafted 1st overall by the Magic, he spent 4 years in Orlando and quickly left his imprint on the team. It took him only a week to put the league on notice as he won Player of the Week in his first week in the NBA. An All-Star since his rookie year itself, he led the Magic to their first-ever playoff appearance in his sophomore season.

His third year at Orlando saw him win his first scoring title. Likewise, he made 295 appearances for the Magic averaging 27.2 points and 12.5 rebounds, better numbers than any team he played for.

Shaq teamed up with Kobe Bryant for the Lakers to form one of the most fearsome duos in the history of the sport. And the duo delivered. The Lakers blitzed their way to three straight NBA Championships from 1999 to 2002. An unprecedented era of dominance that was spearheaded by one of the greatest centers in NBA history.

Shaq won Finals MVP in all three championship wins. Alongside being the MVP, he recorded the highest scoring average by a center in Finals history. He also had his best statistical season ever in 1999-2000 winning the MVP while averaging a league-high 29.7 points and 13.6 rebounds.

The 15-time All-Star played 4 seasons in Orlando and 8 seasons in Los Angeles, which accounts for over half of his career.

After his time in LA, he moved on to the Miami Heat due to his salary demands not being met by the Lakers. His first 2 seasons were of the highest caliber as he finished a runner-up for the MVP award in 2004-2005. And the next season, under Pat Riley, he won his 4th NBA Championship.

He spent 3 and a half seasons at the Heat, averaging a very respectable 19.6 points and remaining an All-Star fixture all throughout. He also earned the highest single-season paycheck of his career in 2004-2005 at over $27 million.

Midway through the 2007-2008 season, Diesel signed with the Phoenix Suns, where had a memorable season and a half. Including his final All-Star appearance at the age of 36, while averaging his best numbers in half a decade. He scored 17.8 points per game and 8.4 rebounds during his time in the Valley.

However, in 2009 Shaq did not participate in the NBA playoffs for the first time since his rookie season. The Suns then traded him to the Cleveland Cavaliers to cut costs.

Shaquille O’Neal then partnered up with the young MVP, LeBron James. The former Lakers center made his intentions clear, he wanted to win a ring with King James. But not much came of the partnership as both players left Cleveland the next year. James went to Shaq’s former team, the Heat, and the 1999-2000 MVP signed with the Boston Celtics on a minimum contract.

In his final season in the NBA, Shaq only made 37 appearances and his time on the court was limited due to an Achilles injury. After a year at the Celtics, the legendary center finally decided to call time on his incredible career. He accumulated 14 All-NBA selection honors and 3 All-Defensive selections. An indisputable Hall of Famer.