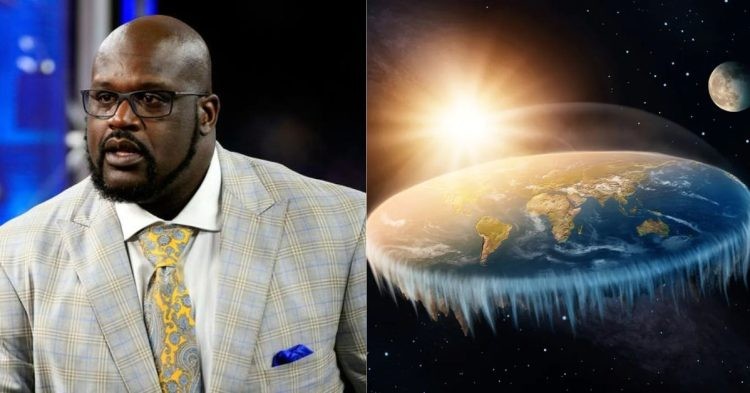 Shaquille O’Neal was one of the most dominant players on the court. There was no one who could stop the former Los Angeles Lakers star. His intimidating presence met that he never backed down from anything. That applies to sharing controversial opinions as well, even if that meant he would raise eyebrows.

In 2017, Shaq appeared on the Australian radio show The Kyle & Jackie O Show. His comments earned the attention of many. He said, “it’s a theory. I flew 20 hours today, not once did I go straight. I didn’t tip over, I didn’t go upside down. It’s just a conspiracy theory, I’m just saying, when I drive from Florida to New York: flat. New York to Seattle: flat. Seattle down to LA: flat. LA back to Florida: flat.”

When Shaq mentioned flying for 20 hours, he meant that he was on a flight from the USA to Australia. The host, Kyle Sandilands said that you can travel to Australia from both the east and west coasts. Shaq instantly replied saying, “It’s still a straight line.”

Adding on to that, the former NBA player decided to ponder whether the globe is actually spinning. He claimed, “You know they say the world is spinning? I’ve lived on a lake for 30 years and I’ve never seen the lake move to the left or right.”

It all started with his podcast, The Big Podcast with Shaq. In 2017, he revealed that he thinks that the Earth was flat. “It’s true: the Earth is flat. The Earth is flat. Listen, there are three ways to manipulate the mind: what you read, what you see, and what you hear,” O’Neal said.

He did not stop there. Shaq went on to question the things he learned in school. The 50-year-old claimed, “In school, first thing they teach us is, “Oh, Columbus discovered America”… Columbus didn’t discover America. So, listen, I drive from coast to coast, and this s**t is flat to me. Satellite imagery could be drawn and made up.”

Many may disagree with Shaq for his unusual comments. To this day, the Earth being flat is still a debate that causes conflicts. Shaq is a player who usually has eyes on him wherever he goes. Now that he has said this, fans may be always on to him. It is still unknown whether the Earth is flat or round, despite many scientists claiming the latter. But it’s always interesting to hear conspiracy theories, as Shaq said.