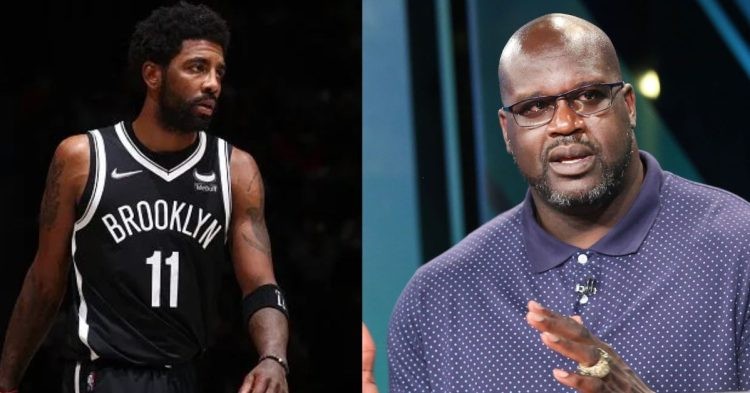 In today’s hot topic on The Big Podcast With Shaq, Kyrie Irving’s contract situation riled up a disappointed Shaquille O’Neal, who did not hold back while sharing his views on the Brooklyn Nets star. Nischelle Turner asked Shaq about Irving’s recent situation and this is what the 4-time NBA Champion had to say.

ESPN Sources: If Kyrie Irving can’t reach an agreement to stay with Brooklyn, he has a list of teams he’d like them to consider on sign-and-trades, including Lakers, Clippers, Knicks, Heat, Mavs and 76ers. None of those teams have cap space to sign him without Nets’ help.

Shaquille O’Neal is an old head who strives for greatness and thus takes no excuse for any shortcoming. Even though Kyrie played well for the Nets this year, Shaq made it a point that it wasn’t enough. “When I was in Orlando, I was the best big man in the world, but if you get swept are you really that good? Everybody in the NBA is talented so I am not impressed with how talented he is”.

He continued with how he got swept 5 times himself, twice in Orlando and thrice in the Lakers, further cementing his point that despite the talent, if Kyrie cannot rise up on the occasion, he might face a similar fate.

Kyrie Irving is a top-level talent in the NBA. He is a 1 time NBA champion and has one of the best if not the best handles in NBA history.

However, his situation in the Nets is not looking good. Kyrie and Durant came together to join the Nets and surprise the world. However, as of now, both parties are at an impasse and this has allowed other teams to fish for Kyrie in the coming trade block.

The Lakers and the Knicks are known to be the major threat to acquiring Irving. If he opts out of his player option, he will become an unrestricted free agent.

As per the latest contracts talks, nothing is looking in the favor of Kyrie Irving as per Woj. Irving wants a longer deal with more money whereas the Nets are willing to give him a shorter deal.

Sources: Kevin Durant is monitoring the Brooklyn Nets’ situation and considering options with his future.

This now opens the path for Kyrie Irving to proceed on finding a new home via opt-in and trade.

As the Nets delay their talks with Kyrie, Kevin Durant might search for other options as reported by Shams Charania of The Athletic. Thus this puts the Nets in a difficult situation, as they don’t want to sign KY for a longer deal but if they don’t, they stand a chance of losing Kevin Durant as well.