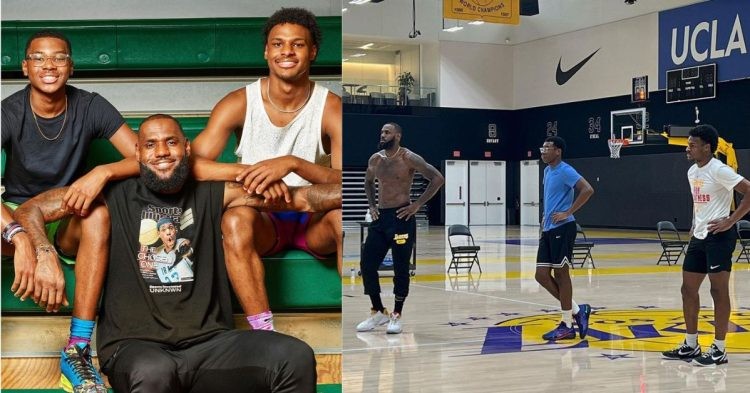 We all know how LeBron James has been playing in the NBA for a while now. The 37-year-old will enter his 20th-year season in the 2022-23 NBA season. The last couple of seasons has surely been disappointing for LeBron and the Los Angeles Lakers. But knowing King James and his mentality, he would still be looking to win another ring next season.

One quality of his that even his haters have appreciated is his longevity. The Miami Heat drafted him at the #1 pick in the 2003 NBA Draft. Since then, LeBron has paved his way to the top. He has won four NBA titles, the most out of any active player. Only Stephen Curry and a few other Golden State Warriors players have the same number.

After all the accolades he has won, you would think he would slow down with his wishes. However, that is not the case. One of LeBron’s biggest wishes would be to play with his sons; Bronny and Bryce in the NBA.

It is no secret that LeBron has been trying to play at least one game in the NBA with his sons. And the young brothers have been doing the same as well. Both of LeBron’s boys are talented basketballers with huge potential. Bronny(17), and Bryce(15) shared the court for the first time at the Axe Euro Tour.

Do Bronny and Bryce have what it takes to make it in the NBA like LeBron James?

As a dad, LeBron would obviously be proud to see how far his sons have come. Recently, the James men were featured on the cover of Sports Illustrated. He tweeted reacting to the news shortly after.

The Lakers star recently signed a lucrative two-year extension with the LA-based franchise. As I mentioned earlier, LeBron is the type who always wants to win more. Another reason would be to play with his sons. “I am a visionary, but I’m also a guy that lives in the moment. I’d definitely be looking at who got first-round picks in 2024, 2025, things of that nature; 2026, ’27. I pay attention to that type of stuff,” he told Sports Illustrated.

BREAKING: LeBron James tells Sports Illustrated he wants to play with his sons Bronny AND Bryce in the NBA.

He also mentioned, “I feel like I could play for quite a while. So it’s all up to the body, but more importantly, my mind. If my mind can stay sharp and fresh and motivated, then the sky’s not even the limit for me. I can go beyond that. But we shall see.”

At this rate, it seems like LeBron might eventually end up playing with his sons. It is still unknown whether he will continue after his current contract. Being on the same team as Bryce may be too far a dream for the 37-year-old. However, he may be able to play with Bronny, who is currently 17 years old.

Players have to be at least 19 and should have at least one year of college basketball before they enter the NBA Draft. If LeBron decides to extend his stay in the NBA when he is 39, his dreams may even come true.